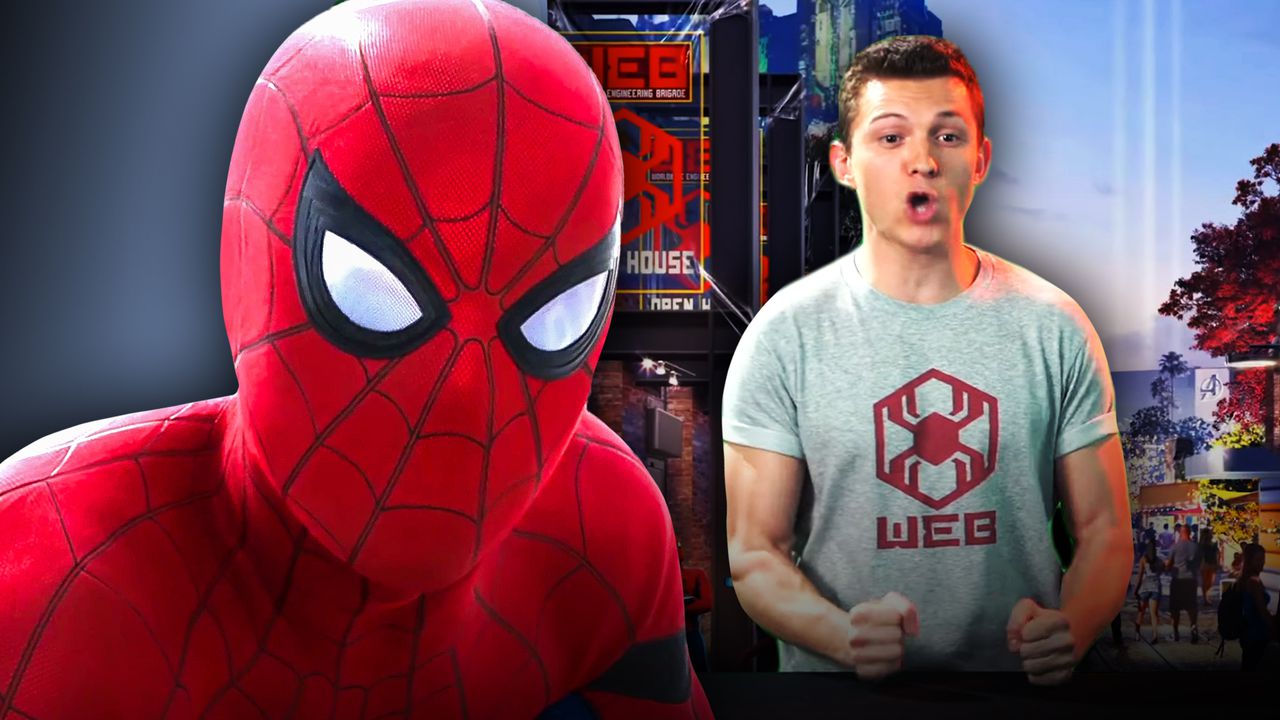 Thanks to the Marvel Cinematic Universe's inclusion in the Walt Disney Company, the franchise has the incredible opportunity for inclusion at Disney's numerous expansive theme parks all over the world. As the series continues to grow both in theaters and on Disney+, the parks are working to catch up to that success by including Marvel Studios' biggest heroes as part of their attractions for guests to enjoy.

In the last few years, the Tower of Terror at Disneyland's California Adventure was re-imagined into the "Guardians of the Galaxy - Mission: BREAKOUT!" ride. The park is even working on an entire new land called Avengers Campus, which is still some time away from opening in full.

The Avengers Campus will even include a Spider-Man ride, which is the center of a new tease straight from the source.

In a new video from the Disney Parks YouTube page, Spider-Man star Tom Holland gives an early look at the "WEB SLINGERS: A Spider-Man Adventure" ride planned to open as a part of Avengers Campus at Disney's California Adventure in Anaheim, California. In the video, Holland gives a brief explanation on the premise of the ride.

HOLLAND: "What Disney Imagineers have created is pretty spectacular. I mean, when I first joined playing Spider-Man, I went to Avengers Headquarters and it was just a bunch of green screens. So the fact that there’s actually going to be a legit place where people can go and visit is pretty awesome. So I’m just super excited to share this with the fans, but also experience it for myself."

HOLLAND: "Peter Parker has started an initiative called WEB, which is the Worldwide Engineering Brigade, and he is giving a presentation on this new piece of tech that they’ve invented which is the WEB Slinger vehicle, and he’s going to be giving a tour and something goes wrong and he needs everybody to help him out to save the day."

HOLLAND: "For me, personally, it’s the most I’ve ever felt like Spider-Man. So everyone is gonna get to share that experience, which is so awesome. So I’m just really excited for it to open and I want to go and ride it again with all the fans."

The full video of Holland exploring the "WEB Slingers: A Spider-Man Adventure" ride can be seen below:

This ride is set to be one of the debut attractions when Disney's California Adventure opens the Avengers Campus expansion, for which the release date is still unconfirmed. The story centers around Peter Parker showing off his Spider-Bots, which get stuck in replication mode and escape from the WEB Workshop.

As the bots level up, riders have to shoot these bots down with webs just as Spider-Man himself would in order to save Avengers Campus. The ride is created with a similar concept to "Buzz Lightyear Astro Blasters" at Disneyland, only switching out blasters for web-shooters. Considering Spider-Man is one of the most popular heroes in all of comics, the chance to emulate his powers in an attraction should be hard to pass up.

Similarly to the "Guardians of the Galaxy - Mission: BREAKOUT!" ride, the story behind this attraction is completely separate from Holland's work as Peter Parker in the MCU. This also will not likely be the last MCU actor joining the fun of Avengers Campus, with other areas like the Sanctum Sanctorum and Avengers Headquarters on the way,

Tom Holland's love of playing Spider-Man has always been evident since he took on the role for 2016's Captain America: Civil War, and this clearly provided a fun opportunity to directly use this portrayal in a way that fans will be able to enjoy. He is currently filming the untitled Spider-Man 3, which will release in theaters on December 17, 2021. There is no set opening date for "WEB Slingers: A Spider-Man Adventure" or Avengers Campus at California Adventure.