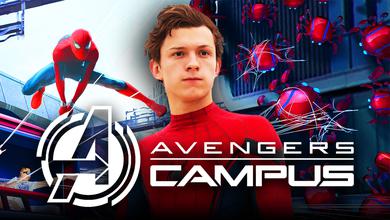 Major theme parks are beginning to reopen all over the world, giving fans from multiple fandoms the chance to ride classic attractions and make memories that last a lifetime. Included in this rush is the ever-popular Disneyland in Anaheim, California, which has taken its time of closure to add some exciting new attractions for fans of Disney, Marvel, and Star Wars alike.

The highlight of these additions is Avengers Campus, Disneyland's tribute to the accomplishments achieved by Marvel Studios over the past 13 years.

The first of these MCU-centric additions came with the reimagining of the Tower of Terror ride into Guardians of the Galaxy: Mission - BREAKOUT!, featuring work from half a dozen stars of the Guardians of the Galaxy movies. This ride will now be included in Avengers Campus along with new attractions like Doctor Strange's Sanctum Sanctorum and the Ant-Man-inspired Pym Test Kitchen.

Spider-Man also gets to swing into the fun with the Tom Holland-led WEB SLINGERS: A Spider-Man Adventure ride, which is reminiscent of Buzz Lightyear Astro Blasters.

The latest release from California's magical theme park indicates that this ride will have some company on the merchandising side as well.

They will also be available at the Disneyland Resort Backlot Premiere Shop in Downtown Disney on May 29 before coming to Avengers Campus on June 4.

Available for purchase is the WEB Power Band, which allows fans to shoot webs just as they do on the ride. The color schemes are inspired by heroes like Spider-Man, Ghost-Spider, Iron Man, and Rescue.

The Power Band fits right onto the wrist and is activated with the classic Spider-Man web-shooting position utilized in the hero's comic and movie adventures.

Iron Man also makes his way into this line of merchandise with hand repulsors inspired by both Tony Stark and Pepper Potts' tech-based heroes. They light up and blast air to bring the MCU's first power set to life.

Peter Parker's Spider-Bot comes as a highlight of this merchandise, fitted with the web-slinger's classic red-and-blue color palate. Fans can control the bot, which seems to be about a foot long in diameter, to move around and battle against other opponents.

The Spider-Bots even come in a variety of color schemes based on the Marvel and MCU's biggest names. These include designs paying tribute to Ant-Man, the Wasp, Iron Man, Black Widow, and Black Panther.

Other merchandise items include Disneyland-exclusive Funko Pops! based on Spider-Man and Iron Man, backpacks, goggles, and clothing items.

While Tom Holland will be featured as his Peter Parker character for portions of the attraction, the ride - and Avengers Campus as a whole - isn't truly canon to the Marvel Cinematic Universe. Disney confirned in 2020 that the Marvel-themed area takes place in an alternate version of the MCUin which Thanos never snapped his fingers to cause half of all life to be Blipped for five years.

DOES WHATEVER A SPIDER CAN

The newly developed Spider-Man ride should be a hit attraction when fans can come aboard in just a couple of weeks. This should be the same case for the merchandise that comes along with the ride, no matter what the price turns out to be.

Now that Marvel is fully represented at Disneyland, collectible items straight from the park are sure to be popular buys for fans who want them either for themselves or as a gift.

Spider-Man is arguably the most easily recognizable hero in comics, meaning this should be quite the opportunity to get a hand on some fun toys and merchandise inspired by his MCU stories.

With Spider-Bots and Iron Man repulsors coming into stock soon, fans of Tom Holland's hero and the MCU in general will have no shortage of options when looking for memorable purchases at the most magical place on Earth.

These items will be available in Downtown Disney on May 29 before Avengers Campus opens on June 4.