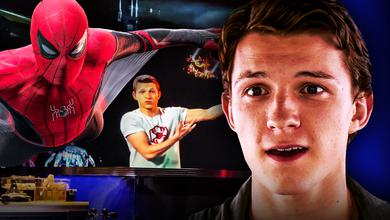 On June 4, Marvel fans will finally be able to step into the MCU at Avengers Campus — a Marvel-themed land at Disney California Adventure park at the Disneyland Resort in California.

The Spider-Man attraction allows fans the chance to sling webs with Spidey when Peter Parker's Spider-Bots presentation goes wrong during the WEB Open House. Additionally, those in this new land may get the chance to see Spidey swing outside the ride as well.

Ahead of the land's June 4 opening, Nerdist posted a video of the WEB SLINGERS: A Spider-Man Adventure pre-show where Tom Holland reprises his signature MCU role.

A video shared by Theme Park Insider also offers a full walk-through and ride POV of the Tom Holland-led attraction.

According to the ride's story, guests are visiting WEB or the Worldwide Engineering Brigade where Peter Parker, played by Holland, is demonstrating his new battle companions called Spider-Bots.

When the bots get stuck in replication mode, guests are drafted to help stop the bots in special vehicles that allow them to sling webs using new motion-sensing tech! Guests can also purchase character-themed WEB Power Bands to change their experience.

A promotional video shared in a tweet by Collider presents another perspective of this Spidey-themed ride and its experience.

This point of view offers a better look at the attraction's ride vehicles and the 3D show scenes.

But again, WEB SLINGERS isn't the only place in Avengers Campus where guests will see Spider-Man.

Nerdist posted a video showing Spider-Man in action at Avengers Campus, including a moving audio-animatronic Spidey that literally swings overhead!

Here’s our preview of the newest section of Disney California Adventure before it opens June 4 💫 pic.twitter.com/ldsW40EgH3

THE FOCUS OF AVENGERS CAMPUS

Avengers Campus was originally slated to open in July of 2020 but was delayed due to COVID-19 and the closure of the Disneyland Resort. But upon its opening on June 4, the land will offer guests the chance to physically experience the MCU and join in on the adventure.

Clearly, Marvel and Disney see these characters as having lasting appeal and worth the long-term investment.