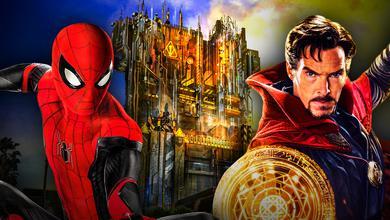 In times like today, the idea of a theme park is a foreign one. The once-bustling places of joy and amusement are all but empty these days, with the current pandemic keeping the majority of would-be visitors away. Needless to say, that doesn't keep the memory of those experiences from popping up in people's mind--let alone the possibilities of future trips.

When it comes to amusement parks that cater specifically to Marvel fans, the pickings are slim. However, things have started changing for the better in that regard. Back in 2017, the original Tower of Terror ride in Disneyland was officially replaced with a Guardians of the Galaxy-themed attraction, one that was met with high praise and included a truly insane looking Rocket animatronic.

Back in 2019, even more Marvel themed changes to Disneyland were announced via Disney's official blog. The new additions to the park included a new Spider-Man themed ride-through attraction, an Ant-Man & the Wasp kitchen, a Wakanda battle from within a Quinjet, and more--all housed within an entire section of the park called Avengers Campus.

The future is exciting for those Marvel fans looking for more theme parks from their favorite fandom. Thanks to the official D23 Podcast, we have now learned that the first steps of getting to this point may have looked a little different.

On the 69th episode of the Official Disney Fan Club Podcast, D23 Inside Disney, Imagineer Joe Rohde revealed that Disney once considered revamping Disneyland's Tower of Terror ride into a Doctor Strange or Spider-Man attraction before they landed on Guardians of the Galaxy - Mission: Breakout!.

Rohde reveals that the Imagineering team "ran a couple ideas" for the space:

“Along comes this thing of 'Hey, we really need a major attraction to open in this window at the Disneyland Resort which is not very far away. So we want you to take Tower of Terror and find an overlay we can do so we can open something big and it would be good for us.' So I need to think Marvel, what could go into it. We ran a couple ideas, ya know, 'We could do Doctor Strange, that would work really, really well with almost what Tower of Terror is. Spider-Man, it's like Spider-Man needs some space, ya know, to do different things. I don't know if that's a thing.'"

It's truly exciting to hear about all of these new upcoming changes to Disneyland.

One would have to imagine that such Doctor Strange or Spider-Man attractions would be MCU-related just as the Guardians of the Galaxy - Mission: Breakout! ride is.

It would seem that their Spider-Man inspirations have led to an already-announced Spider-Man ride as part of Avengers Campus. However, Doctor Strange is still suspiciously absent. A Tower of Terror-like set-up would have been perfect for a Multiverse of Madness themed attraction--with the riders dropping through different dimensions and universes with Strange.

With how large Marvel has become in today's pop culture, it's a wonder why these characters and themes haven't been more prevalent in attractions such as theme parks--let a lot Disney-owned and themed ones. To be fair, that is all likely due to the sticky legal issues in regard to Islands of Adventures and Universal's ownership of the IP within their Orlando parks--something that doesn't seem likely to change anytime soon.

Either way, it's about time. While I myself have not had the chance to go visit California's Disneyland just yet, everything I hear about the Guardian's ride makes me really want to try it out.  It's simply cool to think that in just a couple of years time, we could have half a dozen more high quality Marvel themed attractions within Disneyland's walls.

Now here's to hoping this pandemic can finally ease up, so we can get to experiencing them ourselves.