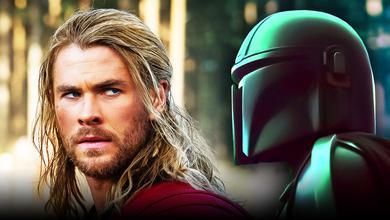 Thor: Love and Thunder is shaping up to be a massive MCU film, especially after the reveal of its growing cast.

Directed by Taika Waititi, the fourth installment of the Thor franchise will see the return of Chris Hemsworth's God of Thunder alongside familiar faces like Natalie Portman's Jane Foster, Tessa Thompson's Valkyrie, and a good chunk of the Guardians of the Galaxy.

Plot details of the MCU sequel are still being kept under wraps, but it is widely expected that Thor and his allies will team up against Christian Bale's Gorr the God Butcher. This is on top of the confirmation that Jane will transform into Mighty Thor somewhere in the narrative.

Production is currently underway in Australia, with Waititi confirming that filming will wrap in a month.

Now, a new behind-the-scenes update has emerged that could shed some light on the post-production timeline of the film.

In an interview with Kea, Emmy award-winning cinematographer Barry ‘Baz’ Idoine confirmed his involvement in Chris Hemsworth's Thor: Love and Thunder. Without revealing much, Idoine shared that he'll be working on the film “until the end of 2021:”

“I can’t talk much about them, but I’m working in Australia at the moment on Thor: Love and Thunder which I’ll be working on until the end of 2021. Then, I’ll just see what happens. Personally, my wife and I are hoping to move back to New Zealand next year.”

Idoine served as the director of photography on ten episodes of The Mandalorian, working alongside Taika Waititi's Star Wars directorial debut during “Chapter 8” aka the Season 1 finale.

TAIKA WAITITI'S USE OF THE VOLUME

Last year, The Hollywood Reporter shared in a report that Taika Waititi will use The Volume during production of Thor: Love and Thunder. This confirmation from Idoine cemented that earlier report since his experience with Lucasfilm's virtual production technology will be essential while filming.

However, it's worth pointing out that this confirmation is conflicting with previous reports about the identity of Love and Thunder's cinematographer since it was revealed on Wikipedia that Shawn Maurer (Meet The Spartans) will man the camera. In addition, Geek Vibes Nation, via HN Entertainment, shared that Hustler's Todd Banhazl “might” be the director of photography of the Marvel film.

Idoine's comment where he revealed that he will be working on Love and Thunder until the end of 2021 could hint that he will be also involved in post-production. The main reason behind this is his familiarity with The Volume technology, and piecing the shots together during editing will be a vital process for him and Waititi.

It remains to be seen how this technology will be used in the movie, but there's a chance that it will likely be formed for certain space scenes that could emulate the galactic vibe of the Star Wars series.

Using The Mandalorian's The Volume clearly has its perks, and Waititi's experience with it during the first season of the show will benefit Chris Hemsworth's fourth Thor film.