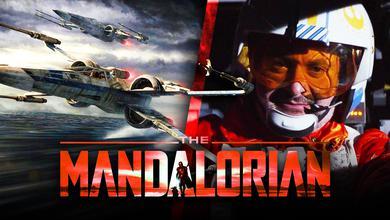 The Mandalorian has returned to Disney+ for a second season. Having already released two episodes, season 2 seems to be on track to be as popular as the first, if not more.

In the second episode of season two, Din Djarin finds himself stranded on an ice planet after a ferrying trip goes awry. Pursued into a canyon by two New Republic X-Wings, the Razor Crest falls into a subterranean cave. Mando also comes face-to-face with some creatures from Star Wars' past.

But who were those X-Wing pilots? Well, as it turns out, they might just be familiar faces to anyone watching.

The X-Wing pilots who chase down the Razor Crest around the top of "Chapter 10: The Passenger", and help Mando fend off the spider horde at the end, were played by series producer, Dave Filoni and actor Paul Sun-Hyung Lee. Sun-Hyung Lee plays Captain Carson Teva and Filoni plays Trapper Wolf, reprising his role from season one. Check out stills from the episode below:

The Mandalorian has something of a track record for casting comedians and comedic actors in bit and supporting roles. Brian Posehn played an ill-fated landspeeder pilot in the series premiere, and Amy Sedaris has a recurring role in the series as mechanic Peli Motto. Richard Ayoade and Bill Burr also appeared as bounty hunters in Chapter 7 back in season one.

Fans of Kim's Conveninece will surely recognize Paul Sun-Hyung Lee, as he played a main role in that series.

And any Star Wars: The Clone Wars or Star Wars Rebels fan worth their salt will almost definitely be able to place Filoni, who has had a major hand in shaping just about every incarnation of the Star Wars franchise on television for over a decade.

Who will show up for a cameo next on The Mandalorian? Perhaps some of the bounty hunters that Mando rounded up in the season one episode "The Prisoner" will crop up again to cause Din Djarin and the Child some additional trouble? Only time will tell.