She-Hulk: Attorney at Law just passed the halfway point of its first season on Disney+, highlighting Jennifer Walters' rise from successful lawyer to up-and-coming superhero. This comes with a brand-new villain in Jameela Jamil's Titania, who finally made her return to the plot after blasting into the courtroom in the final moments of Episode 1.

Last week, Titania took on a starring role in Episode 5 as she sued Jennifer Walters for her use of the name "She-Hulk" after the villain used it for her own personal brand of foot creams. In the end, Jen teamed up with Mallory Book in the case and won her legal battle, although this is far from the last time fans will see this superpowered villain make her mark on the series.

Now, ahead of Episode 6's arrival on Disney+, the network has shared a new look at what's on the way in next week's story, which brings She-Hulk and Titania back in front of one another for another heated interaction.

Marvel Studios released the first full clip from Episode 6 of She-Hulk: Attorney at Law, which will begin streaming on Disney+ on Thursday, September 22.

In the short snippet, Jen finds herself face-to-face with Jameela Jamil's Titania for the first time since their court case, at a wedding for one of Jen's friends. The titular star is clearly furious at Titania for being there, aggressively asking what was happening.

Titania responded to the question by saying that she was "dating a friend of the groom," who invited her to the wedding as his own date.

Patti Harrison, who plays the bride, Lulu, then comes up to Titania and Jen during their conversation. While somewhat admonishing Jen for her volume, Lulu tries to convince the leading hero that Titania "wouldn't just show up to [her] wedding and...try to kill [Jen]." 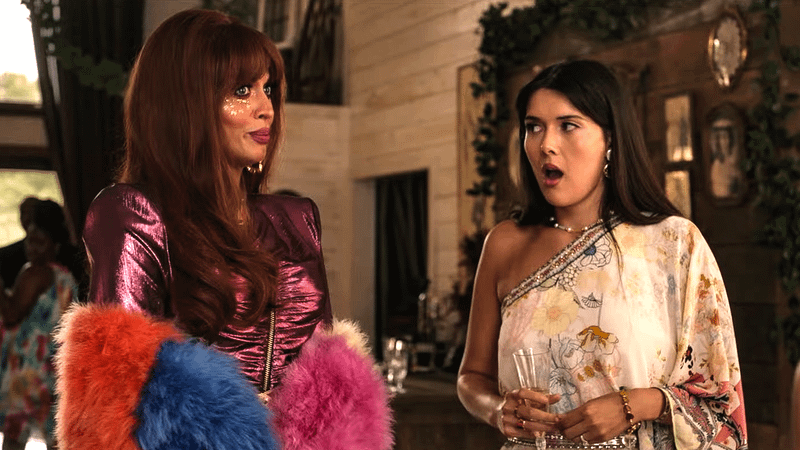 The full clip can be seen below:

Titania Out for Jen as She-Hulk Season 1 Continues

Following the end of Episode 5, fans were eagerly anticipating the return of Charlie Cox's Daredevil as the latest entry closed with a look at his new yellow mask. But with this clip now confirmed for Episode 6, it appears that fans will have to wait a little bit longer for the Man Without Fear to interact with this show's main leading lawyer.

Now, the show looks to dive even deeper into the battle between She-Hulk's leading hero and villain as fans look to learn more about Jamil's Titania. This comes after Jamil actually revealed that Episode 5 and Episode 6 would really push her story forward to new heights, which will add more depth to the conflict between her and Maslany's characters.

This could also be from the same episode that was teased in the mid-season trailer for She-Hulk, in which Jen and Titania come to blows as they're dressed up in fancier outfits, but that's likely to come at a different point than the wedding. No matter how this next episode plays out, however, fans will finally get more of the epic hero vs. villain duel that many have been waiting for throughout Season 1.

The first five episodes of She-Hulk: Attorney at Law are available to stream on Disney+.