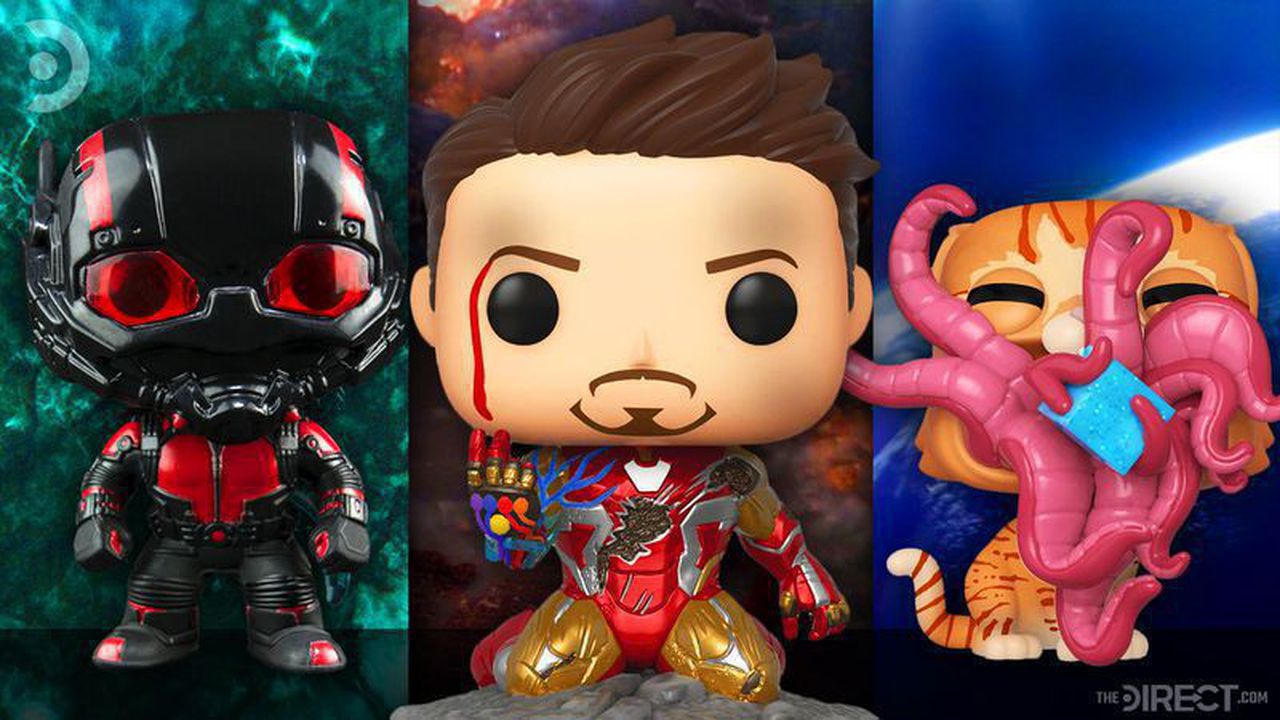 Known worldwide for their big eyes and infamous packaging, Funko Pops have become a staple amongst pop culture collectors. There's something so addicting about collecting them (and yes, I'm talking from personal experience). With every movie that comes out, another line of Pops follows. The bobbleheads beautifully depict the characters and even some pivotal scenes of the movies they represent.

Marvel has had no exceptions to the Funko Pop treatment — fans can't seem to get enough of them. From the very first MCU Pop of Thor from his self-titled 2011 film to the Black Widow batch that just hit selves, Marvel Pops have gotten bigger, better, and, well, more marvelous. Out of the nearly 250 MCU Funko Pops currently on the market, here are 10 that stand out from the rest. 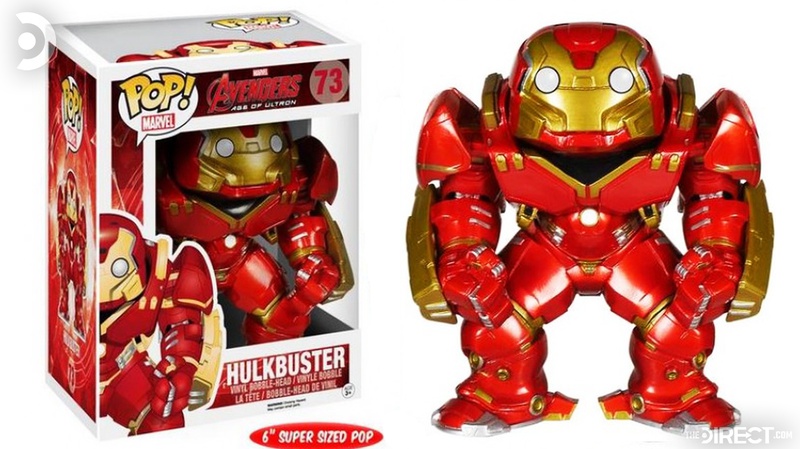 One of the greatest surprises of 2015's Age of Ultron was the introduction of the Hulkbuster armor to the MCU. This six-inch Funko Pop, one of the first of its kind, brilliantly displays one of Tony Stark's most iconic suits, its sole purpose to contain the Hulk if he should ever lose his temper too badly.

This Pop is labeled as 'super-sized' at 6 inches tall, considering most others come in at just about 3.75 inches. As it is quite a chunky suit, this Pop continues to be one of the most easily-recognizable of the MCU bunch from its size alone. 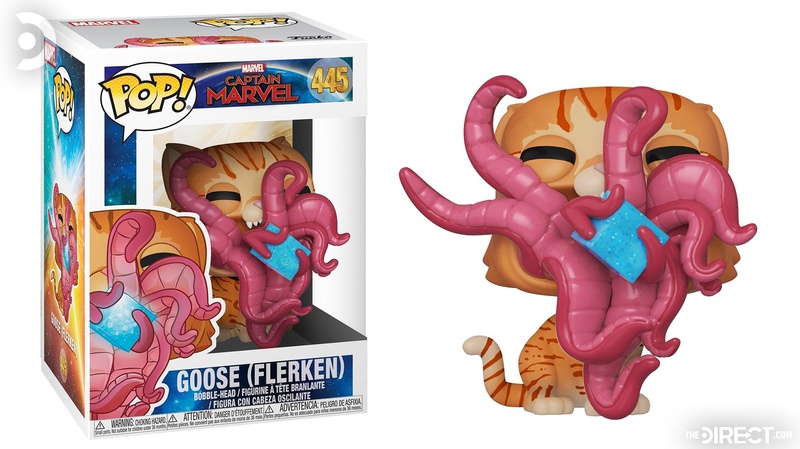 Carol Danvers' feline friend in 2019's Captain Marvel turned out not to be much of a cool cat  — in fact, Goose was (or is, since we're not quite sure if he's still around in the present-day MCU) an extraterrestrial being called a Flerken. As such, he had the ability to, you know, swallow the Tesseract AKA the Space Stone. No big deal.

This Funko Pop shows off that skill with Goose gulping down the Tesseract with his many tongues. The Tesseract even glows in the dark, providing a nice, eerie touch. If you're lucky, you might receive the Chase Variant  — extremely rare Pops made by Funko that provide a twist on a Pop's original design — that instead depicts Goose cheekily sticking a few of those tongues of his. 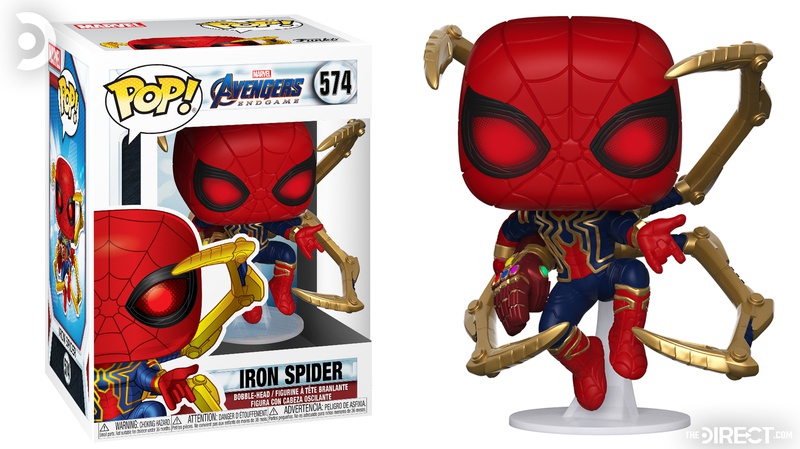 Fans first saw Peter Parker's Iron Spider suit in action in 2018's Avengers: Infinity War, but it wasn't until a year later in Endgame that the full capabilities of the suit were shown. This red-eyed Pop, which emphasizes the suit's Instant Kill Mode, also shows Peter Parker holding the Nano Gauntlet as he did during the final battle of Endgame.

Honestly, this Pop would have been enough with the red eyes and the metallic arms and legs of the Iron Spider suit sticking out from behind. Yet, Funko took it a step further with that Nano Gauntlet, cementing this Pop in a perfectly-captured moment of MCU time. 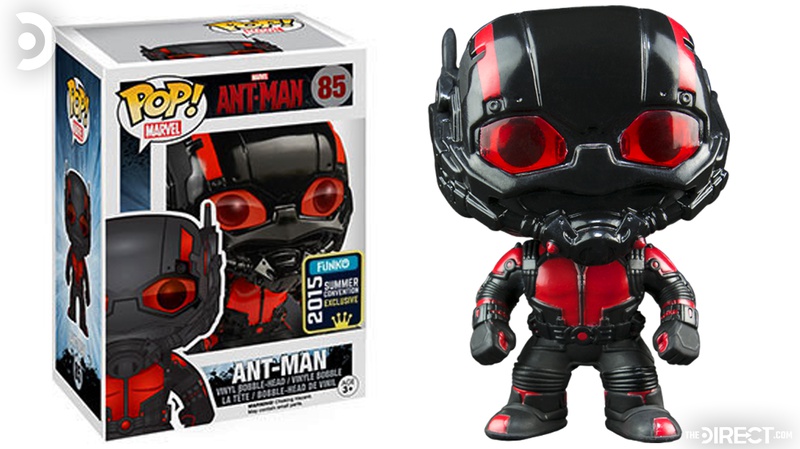 A 2015 San Diego Comic-Con exclusive, the Black Out Ant-Man Funko Pop is truly one-of-a-kind. Though most, if not all, Funkos are directly inspired by the media in which they originated, this one ditches that idea entirely. Rather, the Pop turns the primarily silver-and-red Ant-Man suit into one of mostly black-and-red. Talk about edgy.

As mentioned, this Pop was only available to purchase during 2015's SDCC. Actually, there's been a lot of Funko Pops that have been dubbed as SDCC Exclusives. After SDCC though, these Pops usually hit the market via other retailers. This particular Ant-Man ended up being outsourced to Barnes & Noble bookstores, but don't expect to find it on shelves today — it's a rare find. 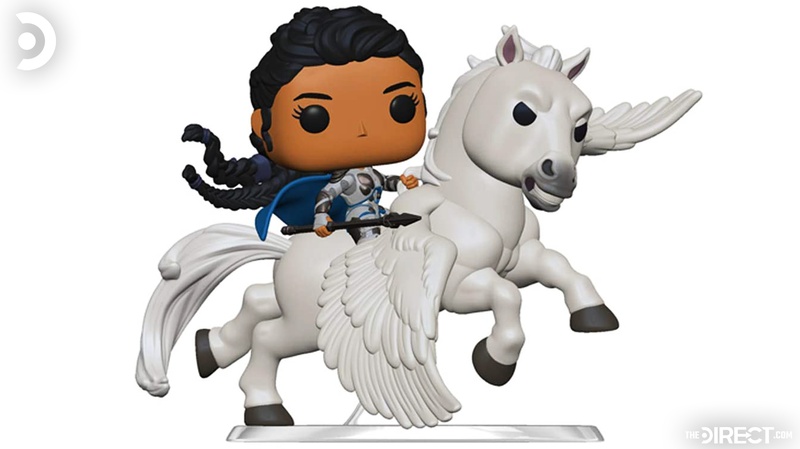 Part of a collection of Funkos called Pop! Rides, Valkyrie's spectacular entrance into the final battle of Endgame comes to life in this Funko Pop. Not only does it depict one of Asgard's fiercest warriors in her battle-ready armor, but it also beautifully features the stallion she charges in on with.

This Pop is set to release this summer and comes in the latest string of Endgame Pops that are still being released due to the film's massive success and endless pot of characters and moments to draw from, some of which may be featured later in this list... 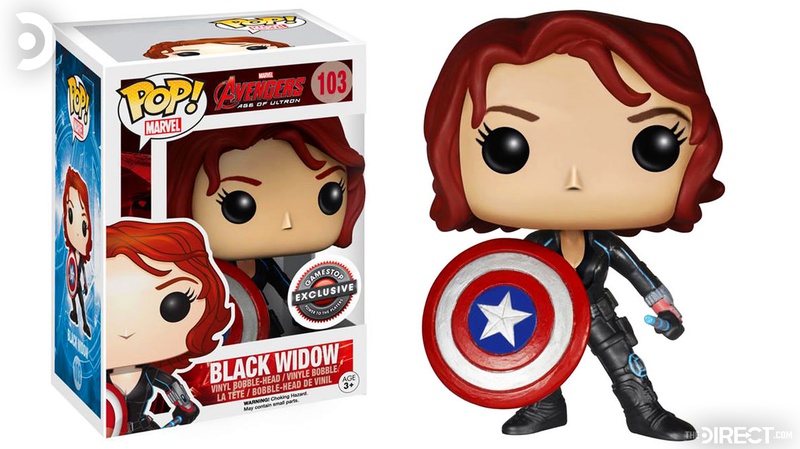 For a brief moment in Age of Ultron, Black Widow donned Captain America's shield to fight against Ultron's robot army. As a result, this Funko Pop was born. A GameStop exclusive at the time it was released, this was only the third MCU Black Widow Pop to be made following the 2014 Captain America: The Winter Soldier variant and the regular Age of Ultron one.

Now, Black Widow has her own entire line of Pops out due to her solo movie releasing this year on Nov. 6. Following the movie's release, it'll be interesting to see if we get any more variants of the assassin. For now, Widow stans need to stay on the hunt for this Pop as it also has become increasingly difficult to find from third-party sellers. 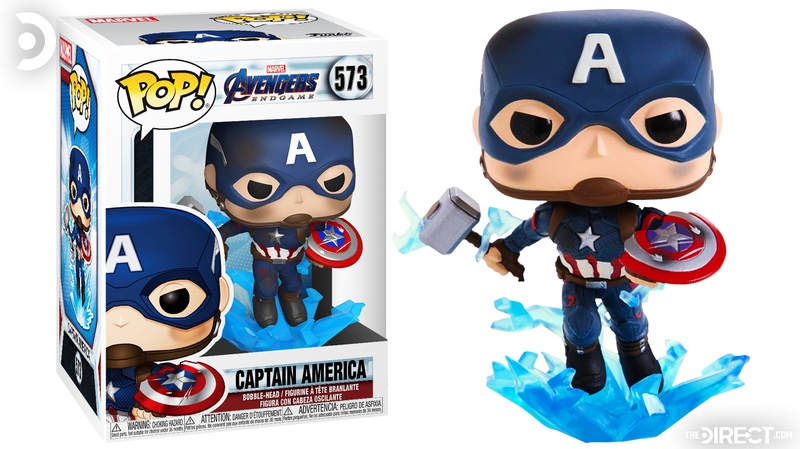 Not only is Cap yielding Mjolnir one of the greatest scenes out of many in Endgame, but it's safe to say that's it's also one of the most iconic scenes in the entirety of the MCU. This Pop celebrates that. It has, of course, Cap with Mjolnir, but it also displays Cap's broken shield (as a result of Thanos' beating) and radiant blue sparks of lightning surrounding the super-soldier as he prepares to fight back against the Mad Titan.

Considering how loudly fans cheered in theaters when Cap picked up Thor's hammer, it's safe to say that this Pop triggers that same level of excitement. It's one of the few Funko Pops that I would even consider taking out of the box to display as it stands so magnificently on its own. 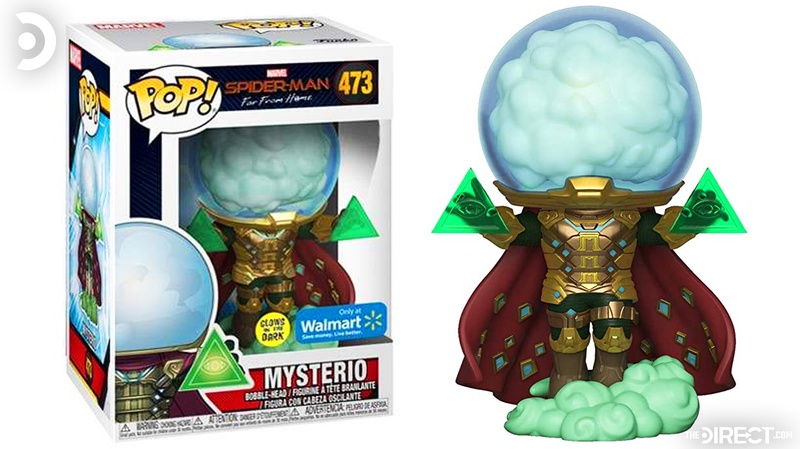 Quentin Beck's Mysterio Pop from 2019's Spider-Man: Far From Home is definitely one of the most detailed MCU Funkos ever made. From the smoke at his feet to the Illuminati-esque engravings on the spells he's conjuring from his hands, Mysterio's Pop hits all the right points in bringing this iconic Spider-Man villain to (plastic) life.

In addition to this standard Funko, there were also two other exclusive Mysterio Funkos released: a Hot Topic one that features an unmasked Quentin Beck and a Walmart one that glows in the dark. Either way, every version of the Mysterio Funko solidifies its standing as one of the most visually-appealing in the MCU bunch. 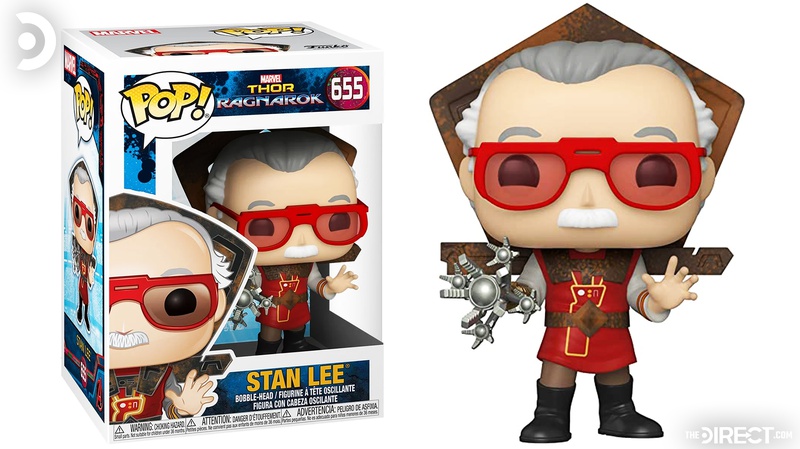 Stan "The Man" Lee had more than his fair share of iconic cameos in every MCU movie all the way up until Endgame. But before he was a '70s ladies man, he was a barber on Sakaar who cut off Thor's golden locks in 2017's Thor: Ragnarok.

This Funko Pop pays tribute to that particular cameo of Stan's. Featuring what looks like the most dreadful pair of barber scissors ever created, balanced out by Stan's cheeky look in his eyes, this Funko Pop celebrates the life that Stan provided in his works. This Pop will also be released this July, though pre-orders are open now. 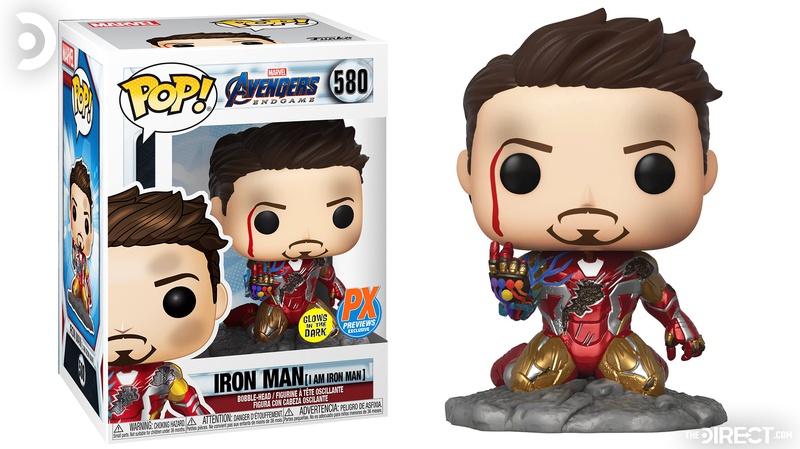 Last but certainly not least, this Pop commends Tony Stark's ultimate sacrifice in Endgame: his life for the lives of billions of others in the universe. Fans will always be able to remember Tony's last scene in the MCU with this more than memorable collectible.

This Pop has it all: the grime on Tony's face after a difficult battle with Thanos, a trail of blood flowing down his cheek, the rubble beneath his knees that he's fallen onto, and his fingers preparing to snap with the Nano Gauntlet. If all of that wasn't enough, the Infinity Stones in the gauntlet and the Arc Reactor on his chest glow in the dark. Once again, this Pop arrives this summer.

And there you have it, some of the MCU's best Funkos thus far. With almost 20 more Marvel Studios projects confirmed to be in the works, there's no telling how far Funko will continue to push the boundaries of its Pops. In the meantime, for all you collectors out there, try to get these stand-outs if you haven't already. They'll really make your collection pop.

All of these Funko Pops are available to order or pre-order on either Entertainment Earth or Amazon.