Marvel Rumor Teases How Chris Hemsworth's Thor Factors Into Disney+'s What If...? Show 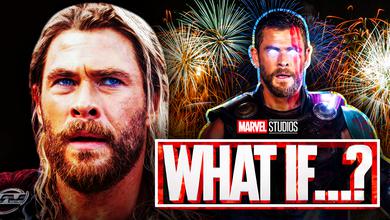 While much of the focus regarding Marvel's Disney+ lineup has been on live-action series like WandaVision, The Falcon and the Winter Soldier, and the upcoming Loki, there's plenty of reasons fans should be excited about the animated anthology What If...?.

Taking its name from a comic series with the same theme, What If...? will look at how key moments in the MCU would've played out if they'd been just a bit different.

A few of these glimpses into otherworlds have been shown in trailers and official announcements so far, and fans can expect to see Peggy Carter take up the shield and serum instead of Steve Rogers and for T'Challa to journey with the Ravagers and become Star-Lord.

The show will feature voice work from the MCU cast playing the animated versions of the characters, and viewers have been told to expect episodes to feel like mini MCU movies.

Now, a new rumor shed some light on how the lens of What If...? will view Thor, God of Thunder.

THOR COMES TO EARTH TO PARTY

In a new report from The Illuminerdi, some insight into exactly what Thor, voiced by Chris Hemsworth will be up to in his What If...? episode has been revealed. The rumor states that the character hasn't found his humility and will go to Earth and host a giant party that could likely be world-ending.

While there are still a lot of unknowns about how Thor's story will play out in What If...?, there's always room for rampant speculation. While the description given of Party Thor paints a picture of one different from the one fans know and love in the MCU, there are some similarities that give a bit of an idea of what viewers might see.

In 2011's Thor, an arrogant Prince of Asgard is stripped of his power and banished to Earth after breaking the peace with the frost giants of Jotunheim. It's after that point that Odin strips him of his power, banishes him to Earth, and places the enchantment upon Mjölnir that only those worthy can wield its power.

While it's worth noting that the rumor says Thor "comes to Midgard to throw a massive intergalactic party," how that relates to the events of Chris Hemsworth's first Thor film is hard to predict. Does this essentially mean the episode is acting as though the first film never happened, or is there a point of divergence somewhere within it?

In the First Look trailer for What If...?, there are several snippets that are likely to come from this storyline. A very early one shows Thor in the rain as he appeared in Thor when attempting to first recover Mjolnir and proving unworthy. Either this same event happens in the Party Thor episode or is the point of divergence.

Perhaps Thor never meets Jane Foster and Erik Selvig after proving unworthy of Mjölnir and doesn't find the motivation he needs to return to the straight and narrow.

Later in the trailer, fans are given a glimpse of Loki in his full regalia marching into the U.N. with Asgardian soldiers at his back. If Thor never takes up the hammer, who is to stop Loki from achieving his rule of Asgard and Earth with it?

While Party Thor and King Loki could be separate episodes, there are only 10 in the first season of the series. It's unlikely Marvel would step on the same territory twice if it can be achieved in one. There's a big MCU to cover, and What If...? seems keen on tackling as much as it can.

It's also possible the shots shown of Hemsworth's Thor retrieving his hammer will take place later in the episode, after Thor's irreverent revelry has seen Loki take Asgard and Earth for his own. In a mirrored version of Thor's humbling moment in his first film, a newly emboldened Prince of Asgard takes up Mjolnir to set things right.

In the infinite timelines viewed by The Watcher, anything can happen. Fans will get their own glimpse into the endless sea of possibilities when What If...? premieres in August 2021.