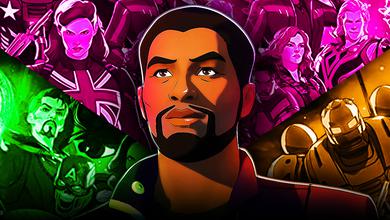 One of the more intriguing announcements when it comes to the MCU Disney+ slate is What if...?. The concept of the show isn't new to fans, having been a famous comic series in the past. The series will explore alternate realities and versions of existing characters that have been a staple of Marvel Comics—it's how characters like Ghost Spider came to be.

It's not just a show, though; it's the first animated show set within the MCU continuity. With the upcoming fourth phase of the MCU focusing heavily on the multiverse, this show holds a perfect place within the overall narrative. It will allow audiences to get further glimpses into the endless multiverse of possibilities.

While the show is set for a tentative August release date, fans still don't have a specific day. For now, they'll just have to settle for a brand-new look at some characters in the show—even if it is ever so slightly new.

WHAT IF...THERE WAS A NEW MARVEL BANNER?

Marketing for Marvel's upcoming animated show What If... has slowly been trickling out, and now, another new look at the show has surfaced in the form of a new promotional banner.

The aforementioned banner can be seen on the show's official store page on Amazon:

While all of these characters have been seen at one point, the Iron Man suit hasn't previously been within the same ensemble. That being said, the Iron Man suit belongs to an alternate Steve Rogers, who assists Captain Carter in the first episode of the series.

As many may have already noticed, the promotional art does look nearly identical to one that was previously seen. However, the one difference is Steve Roger's Mark 1 Iron Man outfit. As to why he wasn't included in the other one, only Marvel knows—but it at least shows that different variations of the shown ensemble may pop up in the future.

Fans know quite a few of the alternate tales already. From Captain Britain to T'Challa's Star-Lord and even an evil Doctor Strange—there's plenty to intrigue audiences. The new promotional photo doesn't include all the new characters, though, as there are several rumored tales that revolve around everyone's favorite web-slinger in Tom Holland's Spider-Man.

Fans will have to wait until August to watch these tales unfold alongside The Watcher. While the show is certainly under the radar compared to other Disney+ projects, when it does land, it's likely to surprise many people.

Who knows? It may be a far more important part of the MCU than most people think.