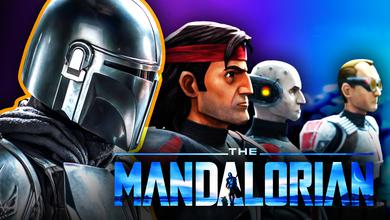 Up until May the 4th, 2021 had been Marvel's year on Disney+ due to WandaVision, The Falcon and the Winter Soldier, and the highly anticipated Loki series set to release on June 9.

But, on Star Wars Day of all days, that galaxy far, far away finally made a triumphant return to Disney+ with the debut of Star Wars: The Bad Batch, Lucasfilm's latest animated series and a spin-off to Star Wars: The Clone Wars which ended in 2020.

Following The Bad Batch's action-filled debut, the series' second episode titled "Cut and Run" brought Clone Force 99 to the planet of Saleucami where Cut Lawquane, a clone who deserted during The Clone Wars series, lives with his family.

But, surprisingly, a new Imperial requirement first introduced in the original Disney+ Star Wars series The Mandalorian surfaced in "Cut and Run," playing a significant role in the episode's story.

AN OBJECT FROM THE MANDALORIAN SURFACES IN THE BAD BATCH

Within the confines of the Star Wars timeline, The Bad Batch technically occurs before The Mandalorian. However, a device from The Mandalorian appeared in "Cut and Run" as this episode's Macguffin.

So, let's set the stage. Due to the growing presence of the Empire, Cut is determined to get his family off of the planet Saleucami.

The problem? The Empire is requiring everyone to have a "chain code" to travel off-planet.

In The Mandalorian, chain codes made their debut into Star Wars lore as an identification tool used by bounty hunters, the New Republic, and perhaps most famously by Boba Fett to prove his Mandalorian lineage. The series also revealed that the tracking fob devices belonging to bounty hunters are driven by these chain codes.

Chain codes appear to be connected to the individual's biometrics and contain their background and history.

This, of course, is why chain codes posed a problem for Cut Lawquane: it would've revealed his history as a deserter.

ARE CHAIN CODES ACTUALLY A RETCON?

Since both The Bad Batch and The Mandalorian stem from the mind of Dave Filoni, it's not surprising that elements from one series would cross over into the other. In fact, it's expected at this point.

The thing is, there's a 20+ year gap between The Bad Batch and The Mandalorian; in between that time, there was no mention of chain codes.

Granted, Boba Fett's chain code detailing his father's history helps sell this semi-retcon; but, in the case of Solo: A Star Wars Story, which takes place between these two projects, Han and Qi'ra face a similar problem as Cut and Suu Lawquane.

The difference is Han and Qi'ra lacked ID chips, not chain codes.

Regardless, it's still great to see today's Star Wars creators connecting their stories, especially for a franchise that has a history of disconnect in regard to its storytelling and details.

It doesn't look like fans have heard the last of chain codes considering the newly created Empire's desire for control. It's highly possible this relatively new device will be a source of continuing drama for Star Wars' newest heroes — Clone Force 99.