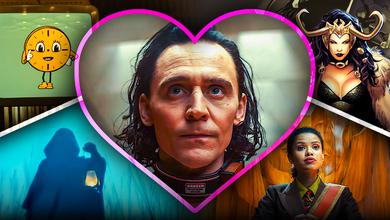 Marvel fans are eagerly anticipating next week's debut of the MCU's third Disney+ entry, Loki, which will bring Tom Hiddleston into his first solo project after a decade of being a fan-favorite supporting character. The God of Mischief will be on a journey unlike any other in the MCU after his 2012 variant stole the Tesseract in Avengers: Endgame, where the journey ahead of him is almost completely unpredictable.

Tom Hiddleston will be surrounded by Marvel's expected team of all-star supporting cast members including Owen Wilson as Mobius M. Mobius and Gugu Mbatha-Raw as Judge Renslayer, both of the Time Variance Authority.

One part of Loki's life that hasn't been explored yet is in the romance department. That's a subject on which the show's head writer recently gave his thoughts.

The outlet noted that Walson shared how there would be "'some love stories'" throughout Loki Season 1.

Waldron teased that "one of the love stories you might see in Loki" is that between the two leads, even knowing that fans are "going to take it the wrong way" upon seeing the quote.

“Mobius and Loki, that's one of the love stories you might see in Loki for sure. Although if you print that, knowing our fans, they’re going to take it the wrong way."

The interviewer clarified that it may be something more akin to the platonic love in Catch Me If You Can between Tom Hanks and Leonardo DiCaprio's characters, to which Waldron exclaimed "Exactly. Right."

LOK-OBIUS OR MOKI BECOMING A THING?

Owen Wilson's inclusion in the MCU was one of the most unexpectedly exciting castings to come in Phase 4, especially as he's shown his enthusiasm for the work through promo material. Throw in the tease of this kind of relationship with the God of Mischief, and it seems that fans are in for another entertaining dynamic to the anti-hero's Disney+ outing.

The trailers for Loki have already teased that Loki and Mobius will be getting to know each other quite well through Loki's imprisonment, before and after he agrees to help the Time Variance Authority. While there is still a deal of mystery behind Mobius' full character, fans are sure to keep a close eye on every moment he spends alongside Hiddleston's lead.

The first episode of Loki will debut on Disney+ on June 9.