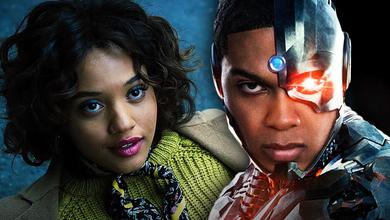 The uncomfortable battle between Warner Bros and Justice League star Ray Fisher continues on over two months after accusations were first sprung upon director Joss Whedon. While there is still so much information that hasn't been revealed about what actually happened, Fisher has garnered support for his side of the fight from some of the biggest names associated with the DC Extended Universe. That support continues to grow with another star from the franchise backing the disgruntled Cyborg actor.

In a new post on Instagram, star Kiersey Clemons, who portrayed Iris West in Zack Snyder's Justice League, has shared a post in support of Justice League star Ray Fisher in his feud against Joss Whedon and Warner Bros. Adorned with the caption “IStandWithRayFisher,” Clemons’ full post can be seen below:

After Aquaman star Jason Momoa publicly backed Fisher a few days ago, Kiersey Clemons has joined in with her own post defending her fellow Justice League co-star. Her first official appearance in any of the DCEU films will be in the Snyder Cut of Justice League releasing on HBO Max next year after Warner Bros. reportedly looked into replacing her for 2022’s The Flash.

There are still no details on what actually happened on the set of Justice League, but Fisher has stood firm on his claims, not backing down from any of the controversy surrounding the matter. No statement has come from Joss Whedon on the matter at this point in time, although Warner Bros put forth their own statement in the last week.