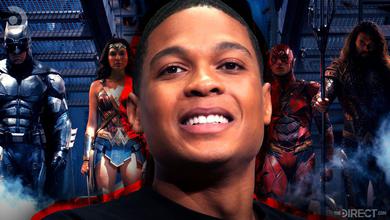 Ray Fisher broke his silence this year about alleged misconduct from Justice League director Joss Whedon and other producers during the shooting of the film. Fisher, who plays Cyborg in the DCEU, has been outspoken against Warner Bros. and the studios' attempts to redirect the investigation. He most recently said that President of DC Films, Walter Hamada, attempted to 'throw Joss Whedon under the bus' in order to stop blame coming onto other DC producer Geoff Johns.

Since Fisher's allegations have come out, Warner Media has launched an independent third party investigation into the events on set of Justice League. Fisher said that he hoped this investigation would "show that Johns, Whedon, Jon Berg (and others) grossly abused their power during the uncertainty of AT&T’s merger with Time Warner." Apart from starting the investigation, Warner Bros. has been fairly quiet on the whole situation.

Warner Bros. has issued an official response, as reported by The Wrap, which claims that Fisher has been uncooperative with the studios attempts to investigate these allegations. The full statement is below:

In July, Ray Fisher’s representatives asked DC Films President Walter Hamada to talk to Mr. Fisher about his concerns during the production of “Justice League.” The two had previously spoken when Mr. Hamada asked him to reprise his role as Cyborg in Warner Bros.’ upcoming Flash movie, together with other members of the Justice League. In their July conversation, Mr. Fisher recounted disagreements he’d had with the film’s creative team regarding his portrayal of Cyborg, and complained that his suggested script revisions were not adopted. Mr. Hamada explained that creative differences are a normal part of the production process, and that a film’s writer/director ultimately has to be in charge of these matters. Notably, Mr. Hamada also told Mr. Fisher that he would elevate his concerns to WarnerMedia so they could conduct an investigation. At no time did Mr. Hamada ever “throw anyone under the bus,” as Mr. Fisher has falsely claimed, or render any judgments about the “Justice League” production, in which Mr. Hamada had no involvement, since filming occurred before Mr. Hamada was elevated to his current position.

While Mr. Fisher never alleged any actionable misconduct against him, WarnerMedia nonetheless initiated an investigation into the concerns he’d raised about his character’s portrayal. Still not satisfied, Mr. Fisher insisted that WarnerMedia hire an independent third party investigator. This investigator has attempted multiple times to meet with Mr. Fisher to discuss his concerns but, to date, Mr. Fisher has declined to speak to the investigator. Warner Bros. remains committed to accountability and to the well-being of every cast and crew member on each of its productions. It also remains committed to investigating any specific and credible allegation of misconduct, which thus far Mr. Fisher has failed to provide.

Borys Kit, a writer for The Hollywood Reporter, has shared that Fisher is in talks to reprise his role as Victor Stone / Cyborg in the Ezra Miller-led The Flash, which further complicates this situation

What is complicating all this back and forth is that Fisher is deep in talks/negotiations to reprise Cyborg for THE FLASH movie. https://t.co/ozLA7amwzv

According to this statement, it seems that Fisher has been pushing back against the internal investigation that Warner Bros. is conducting. The statement also claims that Fisher's earlier report of Hamada attempting to throw others "under the bus" is false and that he has provided no suitable evidence to support his allegations. The specifics of what exactly is going on behind the scenes here is unclear, with both parties clearly coming out in support of their points of view. However, it seems that if Fisher doesn't cooperate with the investigator that Warner Bros. has arranged, that the case will be closed.

Also interesting news out of this statement is that Warner Bros. apparently wants Fisher and other members of the Justice League cast to reprise their roles in the upcoming Flash film. The Flash feature is finally picking up steam, however, allegations against lead star Ezra Miller still haven't been dealt with by Warner Bros. How this investigation unfolds could determine the future of DC studios and its films as well as the studio's processes going forward.

Most of the Justice League cast members have also kept silent during Fisher's claims against the DC execs, but as this investigation continues it's likely that more cast members may have to come forward so that the situation can be resolved. It seems that Fisher won't back down from the situation without a fight, but his attempts at holding Warner Bros. accountable is an important battle for a better workplace for everyone going forwards.