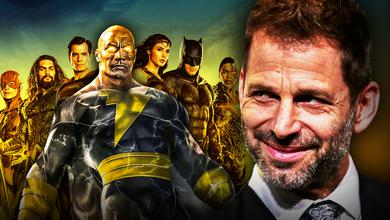 Zack Snyder's Justice League made its long-awaited debut on HBO Max in March 2021 after more than a year of teases and reports pointing to its mysterious existence. This release not only put the disastrous 2017 theatrical cut of Justice League further back in fans' minds, but also reignited vociferous cries supporting the #RestoreTheSnyderverse movement.

Director Zack Snyder has stood at the forefront of this movement, never one to deny giving fans either new insight into his work or a tease of what he would have done had he continued with the DCEU. Through this whirlwind media tour, he's received a great deal of support from both the fans and his contemporaries, although Warner Bros. has not jumped on that bandwagon.

Recently, Snyder briefly spoke on the support reportedly offered from one of the DCEU's biggest actors, literally and figuratively.

SNYDER TOUCHES ON A ROCK-Y SUBJECT

Zack Snyder took an interview on Tyrone Magnus' YouTube channel, in which he tackled the wild rumor of Dwayne "The Rock" Johnson wanting his Black Adam to exist within the DCEU "Snyderverse."

Snyder indicated that he "had not" heard about such claims, although the filmmaker did say it'd be "cool" and that he would "love it" if that became a reality.

Mangus commented on how Snyder excels with darker characters in Justice League and elsewhere throughout his resume, a bill which Black Adam would certainly fit. Snyder responded by saying he does think "he could fit in the world," quickly mentioning 2022's The Flash and saying that fans are "gonna see [his] Batman" once again:

"Yeah no, I mean, I think he could fit in the world, so its interesting. In the Flash movie, you’re gonna see my Batman, and…I don’t know."

AN EVEN DARKER BLACK ADAM FOR ZACK SNYDER

This all stems from a previously released rumor that The Rock fought with WarnerMedia to restore the Snyderverse, which fans have vocally cried out for over the past couple of years. It seems highly unlikely that this will be something that Warner Bros. entertains, but if it's true, Snyder has found an important DCEU star to support his work.

Not much is known about 2022's Black Adam quite yet, although it's continuing Warner Bros.' trend of moving their projects away from everything that happened in Justice League and the rest of Zack Snyder's films. However, it's clear that Snyder will always have ideas going through his mind about what could have been after having put so much work into the franchise already.

It's tough to specifically point out how Black Adam will tie into the rest of the DCEU, although the expectation is that it will at least have some connections to 2019's Shazam! and 2023's Shazam!: Fury of the Gods. With a full origin story still left to tell and nearly a year until it comes to life, these mysteries will likely remain so for the time being.

As for the other movie Snyder mentioned, The Flash certainly has the chance to connect to nearly any and every DC movie that came before it while fundamentally changing the world as fans know it in the movies. With multiple Batmen and a trip through the multiverse in store, the possibilities are quite literally endless for where this movie could go.