The world is still in a state of unimaginable shock and mourning after the tragic death of Hollywood superstar Chadwick Boseman at 43 years old. Fans have flooded the internet with tribute videos and dozens of Boseman's former cast mates and coworkers have shared their love and prayers for their departed friend.

Boseman was especially beloved in the Marvel community after his epic portrayal of the Black Panther over the last four years. His MCU costars have been so emotional discussing the life and legacy he left behind, and another one of the franchise's biggest stars has just added his tribute to the bunch. 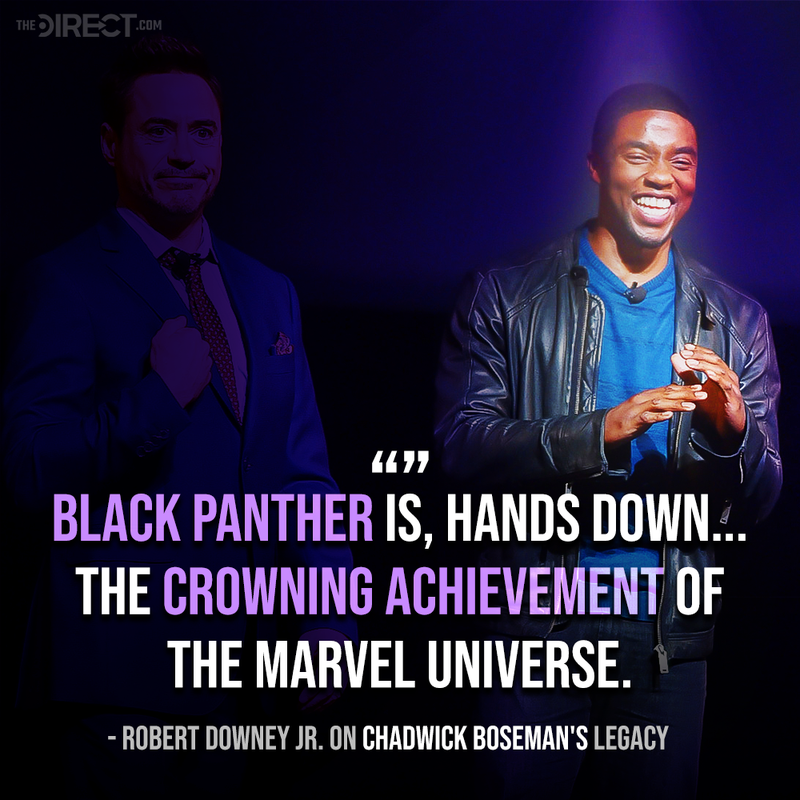 In a new interview with Robin Roberts of Good Morning America, MCU icon Robert Downey, Jr. took a moment to reflect on Chadwick Boseman’s life and legacy after his passing on Friday. Downey started off the interview with one of his fondest moments working with Boseman, which came from the set of Avengers: Infinity War:

Toward the end of the third Avengers [film], - Infinity War - we all kind of lose together. And I remember it was one of those few days when all of the Avengers were together, and it was just the way he walked on set, and the immense success that had occurred, and rightfully so, with Black Panther. And he was just in this kind of stratus of his own, but always, always humble, always hardworking, always a smile on his face. And now, looking back, all the more, I realize just what an incredibly graceful human being he was.

Downey also opened up on how exactly he viewed Boseman, as well as how he wants the rest of the world to view him:

It was about six or eight weeks ago, I reached out to him amidst the George Floyd protests, and he had such a thoughtful and informative refrain for me, as I was on a bit of a listening tour... And Black Panther is, hands down, it is the crowning achievement of the Marvel Universe, and I say that with all due respect to all the films that have been made, including my own. But it was the one where people got to vote with their ticket sales and say 'We require this overdue diversity, this is a meritocracy, or at least it should be, and this is a fantastic movie that has leveled the playing field', and appropriately so. His legacy is so meaningful.

The full tweet with the two-minute-26-second interview can be seen below:

.@RobertDowneyJr. to @RobinRoberts: "#BlackPanther is hands down, it is the crowning achievement of the Marvel universe...it was the one where people got to vote with their ticket sales and say we require this overdue diversity..."#ChadwickBosemanhttps://t.co/b9Y9w2ekMC pic.twitter.com/eyMl03s8Ui

Even though Robert Downey, Jr. and Chadwick Boseman never actually shared a line of dialogue with each other in their three MCU appearances together, it's abundantly clear how much immense respect Downey has for his Marvel superhero co-star. Both actors had key roles as Iron Man and Black Panther in Captain America: Civil War, along with the two-part Infinity Saga conclusion of Avengers: Infinity War and Avengers: Endgame. Downey even helped introduce Boseman to the world as Black Panther for the first time at the El Capitan Phase 3 reveal event in October 2014.

Chadwick Boseman's untimely death has just added to what has been one of the worst years in recent memory, especially considering his career seemed to only be in its earliest stages. This was a man who in just the last decade played Jackie Robinson, James Brown and Thurgood Marshall before he took on the responsibility of playing the first African-American leading man in the MCU. Add in the fact that he fought colon cancer during his entire run with Marvel, and that makes for one of the strongest and most perseverant actors in recent memory.

We continue sending our thoughts and prayers to Chadwick Boseman's family and friends, along with Marvel fans across the world. He will be missed more than words can express.