Chadwick Boseman has made a groundbreaking impact on the film industry with his numerous powerful performances that have touched critics and general audiences alike.

Nobody could have embodied the King of Wakanda better than Boseman, who brought the perfect sensibility of regality, power, and charm to the role that turned Black Panther into a household name.

News of Chadwick Boseman’s tragic and untimely death shocked the world. The forty-three year-old actor had been battling colon cancer for years, proving Boseman to be a hero both on and off screen.

As an iconic character in the Marvel Cinematic Universe, Chadwick Boseman had a profound impact on the Marvel filmmakers and actors who had the privilege of working with him, and many of them have already begun sharing their heartfelt tributes to a member of Marvel royalty.

Our hearts are broken and our thoughts are with Chadwick Boseman’s family. Your legacy will live on forever. Rest In Peace. pic.twitter.com/DyibBLoBxz

"Chadwick’s passing is absolutely devastating. He was our T’Challa, our Black Panther, and our dear friend. Each time he stepped on set, he radiated charisma and joy, and each time he appeared on screen, he created something truly indelible. He embodied a lot of amazing people in his work, and nobody was better at bringing great men to life. He was as smart and kind and powerful and strong as any person he portrayed. Now he takes his place alongside them as an icon for the ages. The Marvel Studios family deeply mourns his loss, and we are grieving tonight with his family.” 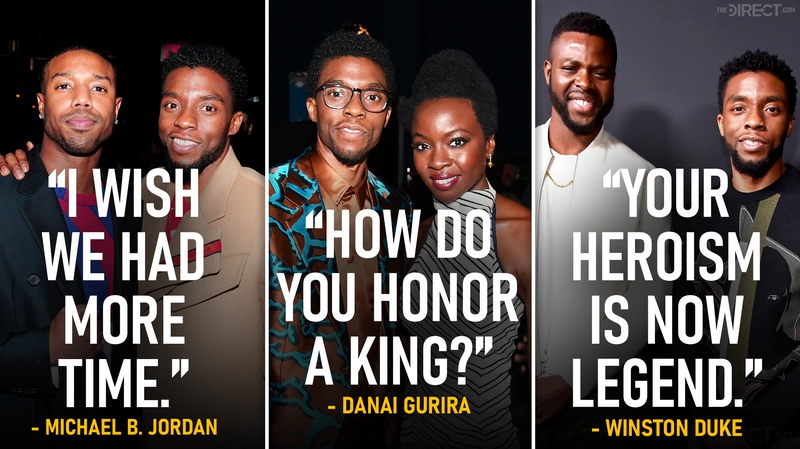 Other Marvel Cinematic Universe filmmakers and actors shared their mourning on social media, including...

Michael Waldron, writer of Loki and Doctor Strange in the Multiverse of Madness:

This brother right here. Wow. No words. This life. https://t.co/tjHTMzLi9o

This man was diagnosed in 2016 and yet all of this powerful work!! I'm vibrating between immense joy for him and such sadness. But the sadness takes over. Condolences to his loved ones. He lives in the mythic. Incredible.

Chadwick Boseman was brilliant, gentle and princely, and the world is a poorer place without him. My love, thoughts and condolences to his family.

All I have to say is the tragedies amassing this year have only been made more profound by the loss of #ChadwickBoseman. What a man, and what an immense talent. Brother, you were one of the all time greats and your greatness was only beginning. Lord love ya. Rest in power, King.

It was the highest honor getting to work with you and getting to know you. What a generous and sincere human being. You believed in the sacred nature of the work and gave your all. Much love to your family. And much love from all of us left here.

This is devastating. Thank you Chadwick for all the joy you brought. Rest In Peace ❤️ https://t.co/gpy2y6qoRU

We are crushed. Marvel has lost a true superhero and friend, but our hearts are heaviest for Chadwick’s family. Chadwick was a singular force whose King T’Challa showed the world the power of good and the meaning of loyalty and friendship. Wakanda forever, my friend.

I have absolutely no words. Rest in power my brother.

I want to be crystal clear: without Chadwick, and what he gave to his character, there is no Shang Chi. Period. My career rides on the coattails of a great man. I wish I would have had the opportunity to tell him in person - but I'll fight for him always, my Eternal King.

I’ll miss waiting to see what he does next. Rest in power. https://t.co/PkRjw4HKSF

I’m absolutely devastated. This is beyond heartbreaking. Chadwick was special. A true original. He was a deeply committed and constantly curious artist. He had so much amazing work still left to create. I’m endlessly grateful for our friendship. Rest in power, King💙 pic.twitter.com/oBERXlw66Z

We are all heartbroken by the tragic loss of #chadwickboseman -- an extraordinary talent, and one of the most gentle and giving souls I have ever met. He brought enormous strength, dignity and depth to his groundbreaking role of Black Panther; shattering myths and stereotypes,

becoming a long-awaited hero to millions around the world, and inspiring us all to dream bigger and demand more than the status quo. We mourn all that he was, as well as everything he was destined to become.

For his friends and millions of fans, his absence from the screen is only eclipsed by his absence from our lives. All of us at Disney send our prayers and heartfelt condolences to his family.

I’m gonna have to tell Cy, Bowie and Zen that T’Challa has passed. What other king can I tell them about now? pic.twitter.com/AFEFxJOFd5

I don’t have words. Rest In Peace, Bruh. Thank you for all you did while you were here. Thank you for being a friend. You are loved. You will be missed. 🤜🏿🤛🏿 https://t.co/8rK4dWmorq

THANK YOU @chadwickboseman for all you gave us. We needed it & will always cherish it! A talented & giving artist & brother who will be sorely missed🙏🏿 RIP

You were a king, a role model, and so much more. I can’t believe you’re gone. You will be missed. #ripchadwickboseman

Chadwick is an inspiration, a warrior with a big kind heart that I’ll never forget. I’m so deeply heartbroken by his passing. Sending love to the Boseman family ... R.I.P. pic.twitter.com/WxA7xOCQps

Chadwick was such an elegant man with great integrity and tremendous talent. He inspired an entire generation to stand up and be king. Honor him by emulating him-show kindness and love to others. Share your talents in ways that impact. Always strive to be a light in the darkness. pic.twitter.com/8XRpRejnf7

I’ve had a hard time wrapping my head around this since last night. Not only that Chadwick died from colon cancer, but that he had it the entire time I knew him, & did the amazing work & lived the life he did during that time.

I didn’t know him well but he was always a good guy to me. I pray that his family find peace in this time of grief.

And I‘ve been looking over @chadwickboseman’s Twitter feed this morning learning about the charities & causes he cared about, even in the late stages of cancer, so that I can help forward those causes. Love to you all. ❤️

Mr. Boseman leveled the playing field while fighting for his life... That’s heroism. I’ll remember the good times, the laughter, and the way he changed the game... #chadwickforever @chadwickboseman pic.twitter.com/IFfCSmLrhR

"I am shocked and devastated. A beautiful human being who I was only just getting to know. A powerful talent and voice and a kind, gentle person. He was leading a revolutionary moment in the MCU and in cinema… and to think he gave us all that great work while going through all that... nothing short of phenomenal. In this moment, it feels like we've lost a friend and an inspiration. But like T'Challa and Wakanda and their salute that reverberates around the world so the true power of Chadwick Boseman will live on. But boy will we all miss you."

Even DC Comics paid tribute to the Marvel star:

To a hero who transcends universes. Wakanda Forever. Rest in Power Chadwick. pic.twitter.com/F5YhIbK4wg

The Direct’s writers and staff express our deepest condolences to Chadwick Boseman’s family and friends. In order to honor him, it's important to celebrate Boseman's legacy, and keep his spirit alive through the ways in which he impacted all of us.

Chadwick Boseman was a cherished and beloved soul, who truly embodied what it meant to be a leader, an inspiration, and a hero.