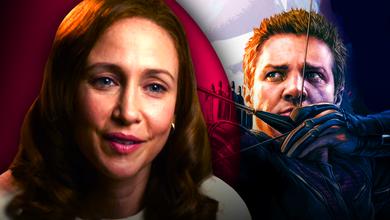 Although the Marvel Cinematic Universe is just a few days away from releasing its first new material of Phase 4, there are more than a handful of other projects still in production for release later in the year.

Movies and Disney+ shows coming out in late 2021, such as the untiled Spider-Man 3, Ms. Marvel and Hawkeye, are still deeply entrenched in the filming process before post-production comes into play, although the excitement for these MCU entries is just as high as its predecessors.

Hawkeye, in particular, has made its rounds through the news streams thanks to a number of New York City-based set photos and videos, and the series will also introduce the wildly popular Kate Bishop as Hailee Steinfeld brings the young archer to life. While not many details are known about the series' plot right now, this Disney+ show will continue Clint Barton's story after and during his run in Avengers: Endgame, which should be the deepest look into his character through his time in the MCU.

Reports have revealed some of the supporting cast of this series next to Renner and Steinfeld, and one of those stars just confirmed her inclusion in a fun social media blast.

In a new Story on her Instagram page, Vera Farmiga confirmed that she will be part of the cast of Marvel Studios' Hawkeye on Disney+. She shared an eight-second video of herself slowly eating a cookie with the show's logo clearly shown in the frosting.

Farmiga can be seen with her hair done and wearing a purple outfit, which appears to be her actual costume for the MCU series.

Farmiga's inclusion in Hawkeye was initially reported in early December 2020, but it's exciting nonetheless to see her officially confirm that she will be in the Disney+ show.

If these initial reports prove to be true, she will be taking on the role of Kate Bishop's mother in this new series, which should mean she will be an important part of the story as Kate transforms into the classic hero from the comics. It's currently unknown how Bishop and her mother will connect with Clint Barton, or how strong the two women's relationship will be, but fans will be on the lookout to see how she fits into the show's plot.

Filming for Hawkeye has been taking place since December, and it will likely still be some time before post-production begins. More confirmations from other actors in the series should come before that time, and hopefully more information will reveal itself once the earlier projects of Phase 4 start to debut.

Hawkeye is currently filming and will release on Disney+ in late 2021.