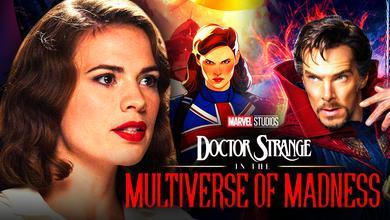 Marvel Studios has officially broken into its multiversal realm of storytelling within the MCU thanks to the wild final episode of Loki on Disney+.

With Sylvie killing off Jonathan Majors’ He Who Remains, it became abundantly clear that the bonds holding space, time, and reality together began to fall apart in a hurry around the God of Mischief. This subsequently became a stepping stone to future MCU projects like What If…?, Spider-Man: No Way Home, and Doctor Strange in the Multiverse of Madness.

While many of the plot details in What If…? are still a mystery less than a month from its debut, it’s confirmed to feature new takes on established characters like Captain Carter and Doctor Strange Supreme. Marvel is even bringing the debut for a Phase 4 newcomer in Shuma-Gorath, who was rumored to be the primary antagonist in the 2022 Doctor Strange sequel.

While his appearance came as a bit of a shock in the most recent trailer for What If…?, a new rumor just dropped that could tie these projects together in an unexpected way.

ANOTHER ROUND FOR CAPTAIN CARTER?

Co-Host Derek Cornell shared a rumor on The DisInsider Show's "Rumor of the Week" segment stating that Hayley Atwell's Captain Carter, an alternate reality version of Peggy Carter who will debut in animated form in Marvel Studios' What If...?, will make an appearance in 2022's Doctor Strange in the Multiverse of Madness.

Cornell said that, if the rumor is true, Hayley Atwell will have a "live-action" role with a "small" part in the film.

A MONUMENTAL TWIST FOR PHASE 4

Hayley Attwell’s Peggy Carter holds a place as one of the longest-standing supporting characters in the MCU, having made appearances in five movies from the Infinity Saga. Although she’s been confirmed to have a key role in What If…? with Peggy taking the Super Soldier Serum, there were no signs pointing to this being more than a one-time occasion.

Should this rumor prove to be true, this would change that thought in a huge way.

One of the first signs pointing to What If…? being canon in the MCU actually came with Peggy herself as she fought off what appeared to be Shuma-Gorath. Now that both are rumored to play varying levels of roles in Doctor Strange in the Multiverse of Madness, there’s a strong possibility that the two could take their duel from animation to the world of live-action.

Knowing that this news is currently just a rumor, fans should take this with a grain of salt to avoid disappointment if it doesn’t come to fruition. However, if it does, it would be a momentous step for the MCU in terms of integrating its storytelling even more from Disney+ to the movies.

For now, fans will have to wait to see exactly how Peggy's story plays out in What If...?, in which she will be the focus of the series' debut episode and likely more through the rest of the season. However she and Shuma-Gorath come into play with each other, it may potentially set the stage for something thrilling to look forward to in the live-action sphere as well.