Marvel Studios is just over two weeks away from the release of Black Panther: Wakanda Forever, the final movie of the year and the MCU’s last theatrical outing in Phase 4. With that debut being so close, the time has come for Marvel to begin promoting the story more heavily through promo spots and other advertising, much of it teasing new footage from the movie.

Much of that new footage has centered on the new female hero that will take over the Black Panther mantle, with many expecting that title to go to Letitia Wright’s Shuri. Tenoch Huerta’s Namor the Sub-Mariner and Dominique Thorne’s Ironheart have also gotten in on the action, setting up a thrilling adventure filled with action, drama, and emotion.

And now, in a surprising development, another new TV spot has shown off an unexpected new image from the movie featuring more than one helmet from the MCU’s Black Panther legacy.

Near the end of the spot, one shot of footage shows off two Black Panther helmets perched next to one another on a shelf. One of them is T'Challa's original helmet from his debut in 2016's Captain America: Civil War, while the other is from his upgraded suit in 2018's Black Panther, and an unknown character can be seen reaching for the latter.

The first helmet from Civil War features a clean-cut silver lining going down the cheeks and the forehead, and it also has the hero’s sliver eye lenses that are taken directly from the comics.

In the upgraded suit from Black Panther, purple kinetic energy glows all across the sides and the front of the helmet thanks to Shuri’s design input. The eyes on this mask also retract into the mask, allowing for the late Chadwick Boseman’s eyes to be seen.

The trailer ends with the Black Panther unsheathing the new golden claws in the suit, which was also seen at the end of the movie's first full trailer that debuted at San Diego Comic-Con 2022. 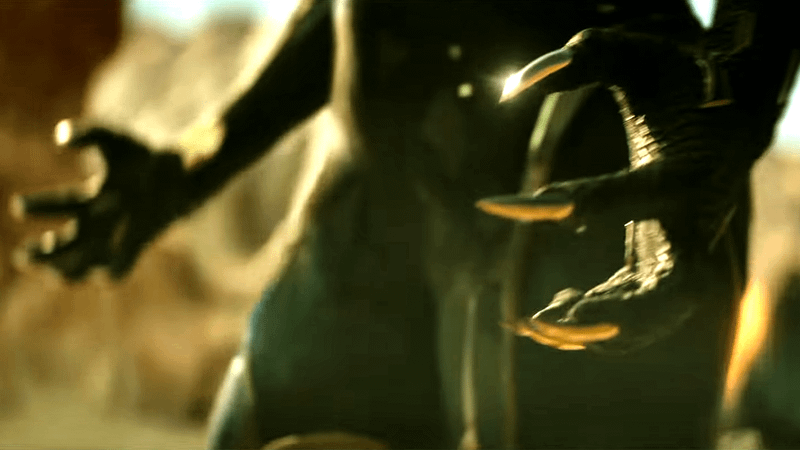 The full spot can be seen below:

With Black Panther 2 largely serving as a tribute to the late Chadwick Boseman and T'Challa, it's no surprise to see both of the character's helmets from his time in the MCU's Infinity Saga. The big question now is what purpose they hold in the movie and if they actually play into the plot as a new Black Panther takes on a bigger leadership role in Wakanda.

Shuri could be using these helmets to help her develop yet another new Black Panther suit, one which is almost confirmed to be hers later in the story even though it boasts yet another new helmet. One of these may also be the one that she holds as she walks in the processional for T'Challa's funeral, which is sure to be one of the movie's most emotional moments early in the story.

Regardless of the reason, this shot will be a powerful one as fans remember T'Challa and Boseman through these helmets. Whether they're an important part of the story being told this time around is another question entirely, and it will be just one of many questions that the movie's 2-hour-41-minute runtime will have to answer.