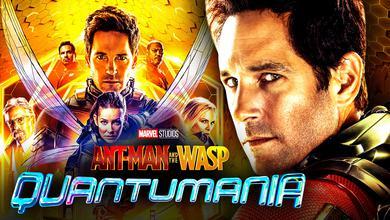 The sequel to Ant-Man and the Wasp is looking to be far bigger than anyone had imagined. Not only will Jonathan Majors be joining the film as Kang the Conqueror, but Corey Stoll could be returning as Yellowjacket.

Other rumors like the Young Avengers forming wouldn't be a surprise considering how many members will exist in the Marvel Cinematic Universe by the time this film is released.

Originally, it was said by actor Micheal Douglas that cameras in London wouldn't roll until July, but it seems like production has already started for one important cast member...

CAMERAS ROLL FOR ANT-MAN AND THE WASP

NFL football wide receiver Tyreek Hill uploaded a personalized video message from Paul Rudd that included the news that he had begun filming Ant-Man and the Wasp: Quantumania in London:

"I wish I could be there. I'm in London filming Ant-Man 3, but maybe I'll show up. I might be really small, you might not be able to see me, but I'll be there."

An excerpt of Paul Rudd's quote can be seen below:

IT’S HAPPENING!
Paul Rudd has revealed he is now in London to begin filming for Ant-Man and The Wasp #Quantumania!

One location seems to be Turkey, Cappadocia “and several locations" which could be replicating giant ant hills in the film.

It was also rumored that the action scenes in Quantumania would be quite large, with the implication that there would be more Giant-Man action in the threequel.

The film will also be using The Mandalorian's The Volume technology, which could have Paul Rudd stomping around as Giant-Man on an actual set in The Volume.

Ant-Man and The Wasp: Quantumania is currently scheduled to release in theaters on February 17, 2023.