Tom Holland Explains Why WandaVision Is His Favorite Marvel Project 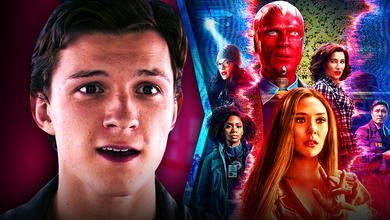 The Marvel Cinematic Universe is set to embrace the multiverse in a big way, and WandaVision appears to have already started the sequence of events that will define the narrative of Phase 4. The Elizabeth Olsen-led series successfully kicked off the next chapter of the MCU, and it did so by doing a deep dive into unusual territory by combining a sitcom approach to a full-blown MCU spectacle.

So far, the plan is working, as evidenced by the growing fan support on social media and the viewing numbers on Disney+. At this point, it's no secret that the narrative of the show will lead to drastic consequences, ultimately affecting other projects such as Doctor Strange in the Multiverse of Madness and, surprisingly, Spider-Man 3.

It remains to be seen how the three properties will connect, but it looks like alternate realities will be the sole reason. Now, as WandaVision inches closer to its finale, another prominent Marvel star has expressed his love for the series.

While speaking with The Playlist, Spider-Man 3 star Tom Holland discussed his love for WandaVision. The Spider-Man actor revealed that he's “obsessed” with the hit Marvel show, admitting that “it's [his] favorite Marvel thing [he's] ever seen.”

When asked about his knowledge of the “super special guest star” of WandaVision, the actor teased the interviewer by asking him how does he know that he will not be the show's big cameo.

The interviewer then pointed out that Paul Bettany said that the guest star was someone “he hasn't worked with,” which led to Holland saying that he “never worked” with the actor. The conversation then shifted to the fact that the pair was featured in films together, but the Cherry lead star shared that they were “never been on set together,” hinting that the cameo could end up being him.

After the back and forth, Holland was asked about his best guess for the big cameo in WandaVision, but the MCU veteran denied giving an answer, citing the fact that fans would think that he “spoiled it:”

“Ooh, do you know what, don’t have a Scooby to who it might be, I really don’t. And I don’t want to say it in case I’m right, and people think I spoiled it. Because people think I have inside information. So I’m going to have to keep my mouth shut there. I honestly haven’t a clue who it might be.”

Holland did reveal that he's “loving the show,” ultimately revealing that the cast and crew of Spider-Man 3 are "spitting their [own] theories" on what's really going on in Westview:

“I’m absolutely loving the show. I love the camaraderie that we have on set every Saturday. We work through the weekends. So, every Saturday everyone’s on set, talking about it and everyone’s spitting their theories out of what’s going on. I love the apprehension of waiting for Friday. I think Elizabeth Olsen is unbelievable in it. The way she can bounce between the different styles of acting and sitcoms is amazing. And I think it’s really funny. I really think it’s really funny. And Paul, In that last episode, when he was doing the interview, I was howling. It’s so funny. I think he’s brilliant. Both of them are fantastic. I love it.”

Meanwhile, in a separate interview with Collider, Holland mentioned that he's always asking WandaVision-related questions to Marvel Studios President Kevin Feige on the set of the threequel:

“It's so difficult because obviously I'm on a Marvel set at the moment. So all of the producers are there, and I could just go up to Kevin Feige and be like, 'So what happens? What's going on?' It's really difficult for me to not ask the questions I want the answers to, but I'm loving it.”

It's always fascinating to see an MCU veteran like Holland giving praise to another Marvel project. The actor's so-called “obsession” with WandaVision clearly mirrors the sentiments of many fans.

On top of that, it's also charming to learn about Holland's curiosity about WandaVision, and his interactions with Marvel Studios CCO Kevin Feige would've been a delight to see.

The mind-blowing guest star of WandaVision has yet to be revealed, meaning that the internet is still swamped with theories on who will it be. While Holland is known for spoiling MCU secrets in the past, it's clear that he already learned his lesson, but his continued tease could hint that he has an idea of the identity of the mysterious character.

Given the connections of WandaVision to Spider-Man 3, it would be huge if Peter Parker showed up in the final moments of the series, potentially tying the threequel's storyline to the multiverse-heavy consequences of the show. By doing this, it would strongly confirm that previous iterations of Spider-Man like Tobey Maguire and Andrew Garfield will appear in the next MCU installment.

However, in canon, the events of Spider-Man: Far From Home happened after WandaVision, so it would be difficult to explain why Peter ignored the Westview anomaly in the sequel.

Whatever the case, the Luke Skywalker-heavy cameo of WandaVision will be a game-changer, and Holland, along with the fans, will be excited when the character shows up on the screen.