Exactly one year after Spider-Man: No Way Home began debuting in theaters, MCU fans have now been treated to the best looks yet at the final Spidey suit that Tom Holland's hero donned at the end of the threequel.

Spider-Man: No Way Home became the MCU’s biggest movie of Phase 4 in December 2021, breaking box office records and the Multiverse alike. Along with more than a half-dozen exciting heroes and villains from different dimensions, Tom Holland’s hero also got the chance to wear a couple of exciting new suits as his journey continued.

Possibly the most exciting suit came in the movie’s final scene after the world forgot about Peter Parker’s existence, as he went back to his roots and designed a new suit to use as the web-slinger.

And while that suit remained mostly hidden in snow and shadows in that last scene, fans now have their best look at it yet through a new collectible item.

"The final seconds of Spider-Man: No Way Home show Tom Holland’s Peter Parker embracing his new life an anonymity, moving into his own apartment and stitching together a homemade Spider-Man suit. The webslinger then picks up call signals and swings through a snowy evening to help those in need."

This pristine suit design comes with a mask that's almost identical to the one that Peter wore with all of his Stark-tech suits from his six MCU appearances.

The suit itself features a bright blue and red color scheme, complete with a larger Spider-logo on the front that's reminiscent of the comics.

Fans get an up-close look at the new Spider-logo while Holland's hero is unmasked, showing off his slicked-back hair and determined eyes as he watches over a dark snowy New York City:

"The Deluxe Version exclusively includes a highly elaborated diorama base inspired by a winter rooftop corner in New York City, where he overlooks the cityscape."

Swinging on one of his webs, the blue in Holland's new suit shines magnificently in the light as the webbing is highlighted in the red boots, torso, and mask:

Holland's hero holds his mask in his right hand in another image as he watches over the Big Apple, with the Spider-logo on his chest being more visible here than in any previous images of this suit:

The figure comes with a wide array of spectacular accessories, including a plethora of interchangeable hands for all of Spidey's web-shooting needs: 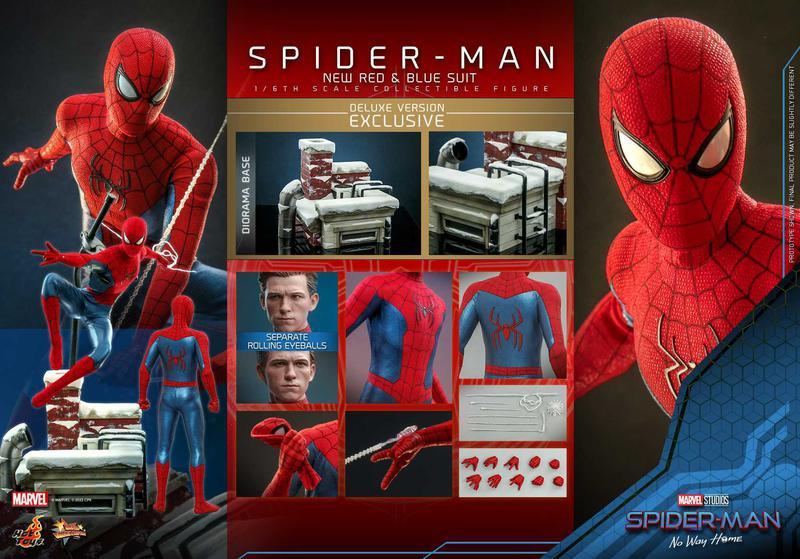 After years of working through his own homemade suits and using Tony Stark's technology, Spider-Man: No Way Home gave Tom Holland arguably the most iconic version of his Spidey suit to date.

Taking the bold color scheme from Andrew Garfield's and a Spider-logo most similar to Tobey Maguire's, Holland combines the past with his own present day designs to give himself a new look post-No Way Home. Particularly considering that Holland's hero is the only one who remembers the truth about what happened in that last story, this new suit serves to help him pay tribute to his fellow Spider-Man and the epic battle they shared.

The big question now is when and where fans will actually get to see this suit in action in a future MCU movie.

Some are expecting that to happen in the upcoming Spider-Man 4, which could be in theaters as soon as 2024 as Holland's web-slinger heads to college and rebuilds his reputation as Spider-Man. On the team-up front, he should also be on the callsheet for 2025's Avengers: The Kang Dynasty and 2026's Avengers: Secret Wars, joining forces with all kinds of heroes from across the Multiverse just as he did in his last solo adventure.

Spider-Man: No Way Home is now streaming on Starz and available for purchase digitally and via Blu-ray.