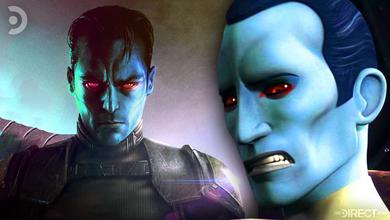 As Star Wars continues to grow on Disney+ by way of live-action television, several familiar characters are getting the opportunity to appear in new projects. The long awaited debut of Ahsoka Tano in live-action is reportedly happening when The Mandalorian Season 2 hits in the fall, alongside fellow animation characters Sabine Wren, Captain Rex, and Bo-Katan Kryze.

Tano's appearance is said to be a backdoor into her own Disney+ series, one that presumably would take place after the events of Return of the Jedi. A recent rumor claimed that casting is underway for the live-action version of Ezra Bridger as well, though the lead of Rebels reportedly isn't appearing in The Mandalorian. We know little about where the Jedi's story will take him next, but a new rumor suggests that the man we last saw him with could be receiving the live-action treatment as well...

Insider Daniel Ritchman has claimed via his Patreon that the live-action debut of Grand Admiral Thrawn is on the way. No additional details were shared.

Live action version of Thrawn also on the way. I don't have any more details right now but just wanted to share.

While no specifics were given about Thrawn's appearance, the most obvious possibility would be that we see the Chiss alongside Ezra Bridger, given that that rumor is true. When we last saw them both, Ezra had summoned the Purgil to destroy the Imperial fleet and take Thrawn's Star Destroyer away from Lothal, with both men on-board. Dave Filoni has confirmed that both characters survived the event, and the Rebels ended with Sabine and Ahsoka embarking on a new journey to find their lost friend.

What makes Thrawn's potential live-action appearance interesting is the alleged Rebels animated sequel that's also reportedly on the way. That series would certainly include both Ezra and Thrawn, which makes one wonder when exactly the live-action debuts are meant to take place. Are they both going to appear in the rumored Ahsoka show? There's always the chance that Thrawn's appearance could take place prior to his Imperial service, though the new Thrawn Ascendancy book trilogy will seemingly tell that story.

The odds are pretty good that Thrawn will be played by his voice actor from animation, Lars Mikkelsen. The actor has a heavy resemblance to his character and the voice work can't be separated from the role, making his casting the obvious choice. Thrawn has been an iconic character since his debut in Heir to the Empire, one who was quickly brought into the new canon upon the EU's suspension. It's been a long journey for Timothy Zahn's creation, and he could now be on the verge of reaching one of the biggest stages.