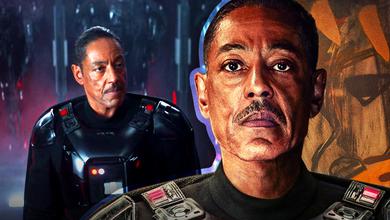 The Mandalorian Season 2 took a slower pace with its most recent episode, "Chapter 12 - The Siege." While it did not necessarily progress the plot in a substantial way, it sowed a few seeds for plot threads to come. The episode even brought inhabitants of Earth into the episode, albeit unintentionally, as a crew member was mistakenly left in one of the shots.

"The Siege" also hinted at a potential cloning subplot, which may explain a character's backstory from the sequel trilogy. Moff Gideon's plans were also teased, with a potential return of the Dark Troopers from the video game: Star Wars: Dark Forces. Although the lovable droid was destroyed in the first season, "Chapter 12" found a way to bring back Taika Waititi's IG-11 in an interesting Easter Egg.

The previous poster showed off some of the new Mandalorians to join the show, displaying Bo-Katan and her Nite Owls' seamless transition into live action.

Now, this latest poster has been revealed, shining a spotlight on one of the returning characters from "Chapter 12."

Disney+ shared a new poster from The Mandalorian season 2, this time being of Giancarlo Esposito's Moff Gideon from "Chapter 12 - The Siege."

He returns. Chapter 12 of #TheMandalorian is now streaming on #DisneyPlus. pic.twitter.com/IOBX07ZW0l

The character noticeably has his Darksaber holstered to his outfit. It should only be a matter of time before Gideon chooses to ignite it.

The poster possesses the same yellow, Western-esque aesthetic that the first three have, once again matching the tone that the second season of The Mandalorian has kept so far. Moff Gideon looks as menacing as ever in this poster, wearing the same Imperial uniform that he did in the first season. This poster teases that he is indeed still in possession of the Darksaber, despite not directly seeing it in "The Siege." This subtly hints that Darksaber action and history are coming later on in the season, which Giancarlo Esposito himself previously spoke on.

The villain has only had a limited role in the second season up to this point, only been seen in brief moments to indicate his current plans. Fans have already seen that Moff Gideon is building up some sort of army, likely to be the returning Dark Troopers. While the Darksaber is a powerful tool, Gideon appears to be well aware that he can not take back The Child on his own. Whether he is intending on making Force-sensitive clones or fast-tracking a path to gain access to the Force himself, Moff Gideon is surely up to no good.

Moff Gideon's return can be seen right now, as "Chapter 12 - The Siege" is currently streaming on Disney+.