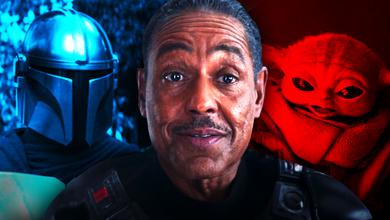 The Mandalorian Season 2 has almost come and gone, with its final installment very close to release. The previous episode, "The Believer," explored Din Djarin's faith to prime the narrative for an explosive final confrontation with Moff Gideon.

Viewers who aren't ready to let go of The Mandalorian following its Season 2 finale will not have to worry, as a brand-new special of Disney Gallery: The Mandalorian will provide a behind-the-scenes look at the past season.

The future for the series and its characters is bright moving forward though, with Ming-Na Wen's Fennec Shand confirmed to return in Star Wars: The Bad Batch. The Mandalorian has also spawned several spinoff shows of its own, paving the way for Ahsoka and Rangers of the New Republic to be made as new Disney+ series.

Leaked information from the show's score may now hint at the potential plot point in the Season 2 series finale...

Originally posted on a forum thread on the John Williams Fan Network and then found by Reddit user r/AdamDriverIsAwesome, the track names for "Chapter 13 - 16" of The Mandalorian have leaked via Shazam.

The most notable track title is a song named "Rest in Peace," potentially alluding to a character death in the final chapter of the season.

All of the track names can be found below:

Star Wars is not unfamiliar with previously released soundtracks spoiling their projects. The Phantom Menace had several tracks that blatantly mentioned Qui-Gon Jinn's death, a massive oversight that was released to the public ahead of the film's release.

It is unclear whether these tracks are in order, though the placement of "Ahsoka Lives," followed by "The Seeing Stone," and "Brown Eyes" suggest that the tracks have been placed chronologically due to these referring to subsequent events. However, the placement of other tracks, such as "Rest in Peace" and "The Sorcerer" seem to contradict this, with no events corresponding to these names. Perhaps "Rest in Peace" could refer to the destruction of the Razor Crest, though this may be too much of a stretch.

With this in mind, "Rest in Peace" could very well indeed indicate that a character death is on the cards in the Season 2 finale. The question, of course, is: Who could it be? With the title suggesting a sense of respect towards the fallen, this likely rules out the dastardly Moff Gideon. Boba Fett and Fennec Shand are also unlikely candidates, due to their potential deaths seeming premature considering how recently they have been brought back.

Of the characters left in Mando's party, this leaves Cara Dune, Grogu, and Din Djarin himself. Cara Dune could potentially be on the chopping block, as she has been shown to have a major affinity for young Grogu. Perhaps Cara will give her life so that the foundling's can continue. A Baby Yoda death would be heartbreaking for Star Wars fans everywhere. Considering his story still has a lot of mileage left, it is unlikely that Grogu will meet his demise in the finale.

The most unexpected death would of course be the Mandalorian himself. Mando has gone on quite the journey throughout this season and has been shown to be willing to do anything to protect Grogu. It is entirely possible that Din Djarin could sacrifice himself so that Baby Yoda lives. So what would become of The Mandalorian? Boba Fett could easily represent the series' name going forward. A potential spinoff was seemingly shut down at Disney Investor Day, so perhaps the bounty hunter will see his story continue in the main role of the hit Disney+ series.

There are, of course, other characters not in Mando's current crew that could make the sacrifice play. Perhaps one of Bo-Katan's Nite Owls or Greef Karga could swoop in and have their fate sealed.

The other track of note is "The Sorcerer," potentially hinting towards a Force user. This could be the theme for the Jedi who has been called to train Grogu, finally being revealed in the last episode. Alternatively, the term 'sorcerer' has been known to associate with the Sith in Star Wars canon, possibly hinting at a Dark Side user coming into the fray.

The final episode of The Mandalorian Season 2, "Chapter 16," begins streaming on Disney+ on December 18, 2020.