The Mandalorian Accidentally Included a Helicopter in Latest Season 2 Episode 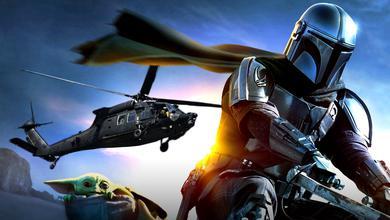 Chapter 14 of The Mandalorian's Season 2 packed a ton of pivotal moments into the season's shortest episode, all while offering one of the original trilogy's most popular characters a shot at redemption. Directed by Robert Rodriguez, the episode titled "The Tragedy" brought Mando and Grogu to Tython per Ahsoka Tano's suggestion. While Grogu tapped into the Force atop the seeing stone, Boba Fett's iconic Slave I appeared overhead.

Yes, Boba Fett is back and accompanied by Fennec Shand from Season 1, and they're here for Boba's armor. Moff Gideon isn't far behind, however, and deploys both Stormtroopers and Dark Troopers to capture Grogu. The latter are successful and Moff Gideon destroys the Razor Crest for good measure.

Much of the episode took place on Tython; and due to the lack of trees and foliage on this planet, viewers accidentally spotted more than just Slave I flying overhead during the episode; and let's just say it wasn't from that galaxy far, far away.

Yes, it's happened again. Much like Chapter 12 of The Mandalorian where a crew member in a t-shirt and jeans made an appearance at the 18:54 mark, Chapter 14 accidentally included a helicopter in the background during a rather pivotal scene.

This helicopter appears at the 10:50 mark, flying left to right over Boba Fett's shoulder during his and Mando's introduction. Thankfully, it's only visible for a moment so it doesn't distract too much from the scene and what's transpiring between these two characters. But still, yet another blooper on the heels of the accidental cameo in Chapter 12 isn't exactly what Disney and Lucasfilm were anticipating following this episode's debut.

Disney+ eventually removed the jeans and t-shirt crew member from Chapter 12 in the days following that episode's airing. It will be interesting to see if Disney+ does the same with this new blunder in the days ahead.

Regardless, Season 2 of The Mandalorian has been met with rave reviews; and even though fans may remember these small accidents, they haven't detracted from this season's high-quality production and level of direction that continues to impress as the season draws to a close.