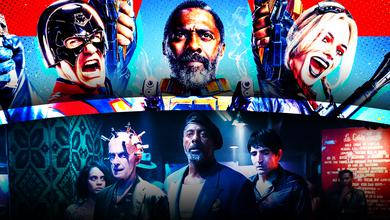 While DC fans across the globe enjoyed the long-awaited debut of Zack Snyder's Justice League on HBO Max in March 2021, the DCEU still has one major canon movie that has yet to make its way to the big screens this year. That comes in the form of James Gunn's The Suicide Squad, the part-sequel/part-reboot follow-up to David Ayer's controversial 2016 outing.

The Suicide Squad will fully embrace the R-rating fans have asked for, giving heavy doses of the gratuitous violence and language the comic characters utilize so often. The movie also features one of the largest ensemble casts of any DCEU movie with returning stars like Margot Robbie and Joel Kinnaman alongside newcomers such as John Cena and Idris Elba.

As for how much time these characters will spend on screen, a new social media movie may hold a hint toward the answer.

THE SUICIDE SQUAD HAS ITS RUNTIME

Amit Chaudhari, a movie insider from India, shared that Warner Bros.' The Suicide Squad will come in with a runtime of two hours and twelve minutes, 132 minutes in total. This runtime comes in nine minutes longer than 2016's Suicide Squad and would make the James Gunn flick tied with 2019's Shazam! as the fourth-shortest runtime in the DCEU

For reference, every movie's runtime in the DCEU is listed below:

A FEW MORE MINUTES THIS TIME

While this may come as a shorter runtime than expected, the sequel will still have a few more minutes of action than its 2016 predecessor.

This could fall in line with Warner Bros.' past desires to keep their films concise, which led to the theatrical cut of Justice League coming in at only two hours on the dot. Regardless, fans should be excited to get a superhero movie that's longer than plenty that came before it.

For James Gunn specifically, this falls right in line with his past films. For example, Guardians of the Galaxy came in slightly shorter at 121 minutes with Vol. 2 finishing with a runtime of 136 minutes, a little longer than the director's first outing with DC.

This reported runtime should give the more than two dozen characters in the film a chance to shine, even taking into account the mystery of how much screen time each star will get. Whatever the case may be on that front, fans are now able to start setting their expectations for how long they'll be sitting in theaters or in front of their TV screens.

The Suicide Squad will release worldwide on August 6, 2021.