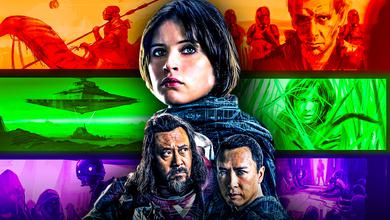 While the reception for Disney's Star Wars Sequel Trilogy is somewhat mixed, many fans still feel that 2016's Rogue One: A Star Wars Story was a fitting addition to the Star Wars Saga.

The film told the story of a group of Rebels who were responsible for delivering the Death Star plans to the Alliance, allowing Luke Skywalker to destroy the space station in A New Hope.

But even though the film was released back in 2016, there are still stories to tell about Rogue One.

For instance, Andor, a new Disney+ series featuring Rogue One's Cassian Andor is set to release in 2022. And those who worked on the film itself are now sharing what might've been for the first stand-alone Star Wars film.

Rogue One's visual development supervisor Matt Allsopp, along with the film's screenwriter Gary Whitta, took to social media to both reveal and discuss what was removed from the original plot of the film.

On Twitter, Matt Allsopp posted a series of Rogue One storyboards saying these are "a snippet from the 100's of frames made for Rogue One."

Rogue One - Storyboards
A snippet from the 100's of frames made for Rogue One. I spent many hours in a room with @JonMcCoyArt working on boards. Very rewarding to see the super talented previz team bring them to life. #RogueOne #StarWars #Storyboards pic.twitter.com/w4aqud4rLH

In the caption, Allsop said, "Rogue One - Storyboards. A snippet from the 100's of frames made for Rogue One. I spent many hours in a room with Jon McCoy working on boards. Very rewarding to see the super talented previz team bring them to life."

The first set of boards shows Rogue One's heroine Jyn Erso, a U-Wing, and the Rebels in action.

In fact, screenwriter and author Gary Whitta commented on Allsop's post saying that these images were from his "first draft, wherein Jyn led a rebel commando team."

That first page of storyboard panels is from my first draft, wherein Jyn led a rebel commando team to Edu (later re-spelled as Eadu), the planet where the Empire was building part of the Death Star. Yes, those are nerfs, and they were being herded! https://t.co/DyFbAkBqur

Since this was from Whitta's first draft, it makes sense why audiences didn't see this scene in theaters.

But Whitta had some other fascinating notes to share in his comment, "That first page of storyboard panels is from my first draft, wherein Jyn led a rebel commando team to Edu (later re-spelled as Eadu), the planet where the Empire was building part of the Death Star. Yes, those are nerfs, and they were being herded!"

It's worth noting that the boards seem to show rain which was included in the events on Eadu in the finished film.

The next set of panels shared by Allsop appear to show events on the planet of Jedha.

They show views of Imperial occupation, along with a look at Jedha City and droid K-2S0.

But unlike the first set of storyboards, what's shown in these boards are similar to what audiences saw in the finished film.

Allsop's next collection appears to be from the planet Lah'mu seen in the opening scene of Rogue One and where the Erso family was hiding from the Empire.

While the wide, desolate landscape is similar to the look of the planet in the film, it differs in that it's more of grassland than the volcanic landscape shown in Rogue One.

The boards also show Director Krennic's confrontation with Galen Erso and either Jyn or her mother Lyra watching through the blades of grass.

The last panel in this collection also appears to show a group of individuals around a table with at least one appearing to be a Quarren, the squid-like species from Mon Cala as recently seen in Season 2 of The Mandalorian.

The final set of storyboards shared depict the Battle of Scarif featured in the third act of the film.

This set truly shows the intended scale of the battle, particularly that of Rebels against the AT-ACTs.

A LOOK AT WHAT COULD'VE BEEN & WHAT WAS IN ROGUE ONE: A STAR WARS STORY

It's no secret to Star Wars fans that Rogue One experienced considerable changes throughout its production with scenes from the trailer never actually making it into the final film itself.

However, apart from Whitta's scene where Jyn led a commando team and the almost big-screen debut of nerfs, these masterful storyboards showed that a number of shots, scenes, and even the film's sense scale visualized for the film in its early days actually did make it into Rogue One.

In addition, for fans who love learning more about the movie-making process and what goes on behind the scenes, these boards and commentary offer insight into this particular aspect of filmmaking.