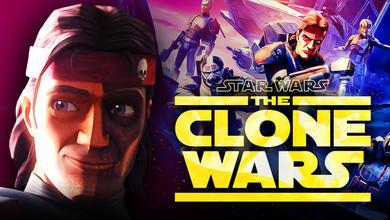 One of the most intriguing aspects of Star Wars: The Bad Batch, Lucasfilm's newest animated series on Disney+, is the time period in which it occurs within the Star Wars timeline.

The series' debut episode covered the events of Order 66 from Clone Force 99's perspective, with subsequent episodes touching on the threat posed by the newly formed Empire.

And while Clone Force 99 appears to be safe from the Empire for the moment, the threat of the Order 66 inhibitor chip has remained.

After Wrecker nearly succumbed to the chip in last week's episode, "Decommissioned," a familiar face from Star Wars: The Clone Wars arrived to save the squad from themselves in the show's latest release.

After being name-dropped earlier in the season, Captain Rex from both The Clone Wars and Star Wars Rebels finally appeared in The Bad Batch Episode 7, "Battle Scars."

Apparently, Rex was the mysterious "him" the Martez sisters contacted at the end of "Decommissioned," and after surviving Order 66 with Ahsoka Tano, he claims he's been "keeping a low profile."

Upon learning of Wrecker's headaches and that Clone Force 99 haven't removed their inhibitor chips, he immediately informs his brothers that the chips "make you a threat to everyone around you" and that they are all "ticking time bombs."

Rex later has the squad meet him on the junkyard planet Bracca, which previously debuted in Star Wars Jedi: Fallen Order. There, they sneak into a Republic cruiser where, after a few issues, the Batch's chips are removed.

EVERY CREW NEEDS A CAPTAIN

Fans of The Clone Wars know that Rex actually succumbed to the inhibitor chip before Ahsoka Tano had it removed during the series finale. He then had to fight against his brothers, who were also being controlled by the chips, much like Clone Force 99 had to do with Crosshair, in order to survive. It makes sense for Rex to be the one to educate the squad about the chip and to save them from its effects.

In Star Wars Rebels, set 14 years after The Bad Batch, Rex was found living out his retirement on the planet Seelos before teaming up with Ghost crew and Ahsoka.

But at this point, he isn't interested in settling down just yet, as he confesses to Hunter that he spent his life "defending the Republic. Can't stop now.”

When Hunter tells him the Republic is gone, Rex seems to think differently, saying "not all of it" and telling him that Clone Force 99 would be a "tremendous asset." But just what he means by this, and who he's working with, is left unsaid.

It seems likely that Rex is still working with Ahsoka at this point, since Rafa and Trace Martez are who notified him about the clones. And because the sisters are supposedly working against the Empire, it seems safe to say that Ahsoka and Rex are too.

Why he and Ahsoka later separate and he decides to retire remains to be seen. However, audiences just might get those answers this season, as Rex and Hunter's conversation hinted that this isn't the last audiences have seen of the captain.

And since The Bad Batch is a Dave Filoni show, it's likely that fans will see Ahsoka Tano in the near future as well.