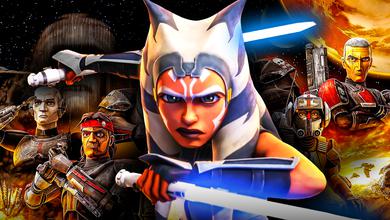 In true Star Wars fashion, The Bad Batch has its own story to tell while also finding ways to reference and connect to other Star Wars stories, whether it be Return of the Jedi rancors or a plan first mentioned in Rogue One: A Star Wars Story.

In "Decommissioned," the clones venture to Han Solo's home planet of Corellia to retrieve the head of a Tactical Droid for their new employer Cid.

For reference, tactical droids are not the typical slapstick battle droids. They're extremely intelligent.

According to Ahsoka, they're "great at finding things" and even found her "and my master a few times when we didn't want to be found."

And now in The Bad Batch, Clone Force 99, and curiously Ahsoka Tano's friends from Season 7 of The Clone Wars — Trace and Rafa Martez — are on the hunt for this type of droid head.

But surprisingly, that's not the only droid-related connection to Ahsoka in this episode.

After teaming up to escape the police droids on Corellia, Clone Force 99 join the Martez sisters on their ship where an R7 droid is present.

R7-A7 just happened to be Ahsoka's faithful droid companion, and it looks like R7 is helping the Martez sisters on this mission.

AHSOKA TANO IN THE BAD BATCH?

It's worth noting that R7 sports two different looks in this episode which is kind of confusing.

But yet, the droid is still referred to as R7 in both scenes. Perhaps the astromech was also in disguise to help the Martez sisters in their mission?

Regardless, it's unlikely that Lucasfilm referenced a tactical droid head and Ahsoka's droid for no reason, especially since Trace and Rafa Martez are also connected to Ahsoka.

Maybe fans will see the return of Lady Tano sooner than later in The Bad Batch?

Captain Rex is already confirmed to cameo at some point during the series; and after The Clone Wars finale, it will be interesting to see how the two are surviving or if they're already pursuing different paths.