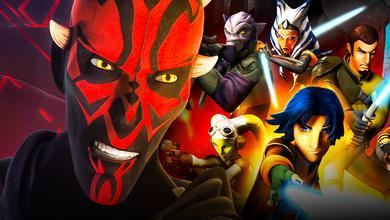 There's been a lot of news surrounding the Star Wars Rebels cast as of late, pertaining to their arrival in the live-action world.

Unfortunately, not every star of the hit animated show lived to go on further adventures. During the back end of Rebels' final season, Jedi Knight Kanan Jarrus met his fate when he sacrificed himself to allow his friends to escape a similar fiery doom. The character's death was the turning point in Season 4's arc and left both the Ghost crew and the audience grieving, but Kanan was a necessary loss for Ezra to liberate Lothal.

Kanan's demise seemed inevitable from the beginning of the show, but no one could have imagined it would be as impactful as the way things transpired. Creatives like to play around with all kinds of ideas, and it turns out Dave Filoni had pondered some other ways that Kanan may have lost his life. The man behind Cowboy Jedi's voice has shared that, at one point, Kanan was only going to make it halfway through the show...until being struck down by a familiar villain.

In an interview with Collider, actor Freddie Prinze Jr. revealed that he and Dave Filoni had discussions about Kanan being killed by Maul in "Twilight of the Apprentice":

"Dave and I talked about me dying at Maul’s hand, at the end of Season 2, but then the same people who didn’t want me for the project suddenly said, “No, he can’t die. He has to be in every episode.”"

Prinze Jr. highlighted some of his favorite moments from the series:

"The “Trials of the Darksaber” episode was my favorite episode out of all of them... The fight with Maul getting blinded was special. Teaching Sabine was special."

Of course, Kanan's death was on the list as well, but Prinze Jr. refused to take any credit for it:

'The death, which everyone gives me the most credit for, has nothing to do with me. There’s no dialogue there. That’s all Dave, the animators, music and people more talented than me that made you think it was me."

HOW KANAN'S INITIAL DEATH MAY HAVE IMPACTED THE SHOW

As mentioned before, Kanan's death was an inevitability. As Season 2 of Rebels built up to the grand finale, the show took on an eerie tone. It was clear that anything could happen to anyone on Malachor, and whatever occurred on the Sith world would leave all of the finale's participants changed forever.

Maul's appearance and immediate attempts to seduce Ezra to the dark side put the team of Jedi in a bad spot out of the gate. With a large role in The Clone Wars full of manipulation, Star Wars fans knew Maul was not to be trusted, and betrayal was inevitable. Kanan's death on Malachor always seemed to be on the table, and having Maul do the deed would not have been surprising in the slightest.

The problem is, killing off Kanan would leave Ezra without a mentor for the rest of the series, derailing his development as a Jedi and making him easy pickings for Maul. While Kanan's death may have been emotional, blinding the character was even more powerful in presenting him with a new challenge to overcome. What could have been an early end for Kanan turned into one of his defining moments, and the loss of his sight eventually pushed him to become a wiser Jedi than he ever had before.

With two more seasons of development now allotted to the character, Kanan's ultimate demise in "Jedi Night" stands as one of the most emotional in all of Star Wars. It packs a punch because it was earned, and the grieving crew served as a vessel for the audience as well. And it didn't stop there. In sacrificing himself, Kanan's act of selflessness eventually helped Ezra learn his master's final lesson: to let go, something that every Jedi must find a way to do.

In the end, it was a wise decision to spare Kanan in "Twilight of the Apprentice". The alternative outcome for him served the character in a much stronger way, and it didn't take away from the climactic confrontation between Ahsoka and Vader. This death may have only been part of the early waves of discussions, as there were many ideas that never happened in the finale. Just as Maul was supposed to off Kanan, Vader was to fight and kill Maul. Ahsoka's death was also a serious consideration.

It's hard to imagine "Twilight of the Apprentice," and Kanan's character arc, going any differently then they ultimately did. Star Wars Rebels tends to get some flack for its younger target audience, but both Filoni and Prinze delivered in creating one of the best Jedi in the canon who will leave an untouchable mark on the galaxy far, far away forever.