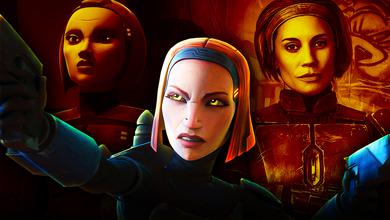 The Mandalorian season 2 shocked many with "Chapter 11 - The Heiress" after adding Bo-Katan Kryze to the ever-expanding roster of characters in the series.

Star Wars finally broke their silence regarding the major character reveal, posting stills of Bo-Katan and the Nite Owls from the episode. Bo-Katan's actress, Katee Sackhoff, has also been able to speak about her transition to live-action after playing the character in animated form for so long.

Sackhoff also discussed the character's future and how Bo-Katan's ego may get in the way of her goals as a leader. The question of Ahsoka Tano and Rosario Dawson's supposed casting was also brought up with Sackhoff, who said she "[didn't] know anything about it."

A previous rumor suggested that Bo-Katan's story would continue past her inclusion in "The Heiress," with a team-up series with Cara Dune supposedly in the works.

Katee Sackhoff was also posed the question of having her own Bo-Katan spinoff, to which The Mandalorian actress gleefully responded...

In an interview with Entertainment Tonight, Katee Sackhoff commented on the potential of a Bo-Katan spinoff. When asked whether she would be interested in starring in a spinoff of her own, Sackhoff excitedly expressed enthusiasm for the possibility:

I mean, who wouldn't [be interested in a spinoff]? I mean, c'mon! That's what's so great about the Star Wars universe, that there's so many different places to go off in. There's so many stories and interesting characters to go after that, you know... I have no idea. But I would love to play this character as long as she has a story.

With overwhelmingly positive reception for the character's inclusion and keen interest from Katee Sackhoff herself, a spinoff series would certainly please a lot of people.

A spinoff for Bo-Katan could go a few ways. If Bo-Katan does not ultimately obtain the Darksaber from Moff Gideon by the end of The Mandalorian season 2, a spinoff could follow her continued journey to retrieve the blade alongside her Nite Owls. While this is certainly possible, it may seem a bit disappointing to not resolve the Darksaber plot thread in the series that initially started it. With Katee Sackhoff remaining coy about additional inclusions in future episodes, there is a good possibility that Bo-Katan, Din Djarin, and Moff Gideon's paths could converge again.

If the rumor of a Bo-Katan/Cara Dune series is accurate, an unlikely pairing could be traversing the galaxy together instead. As the two have yet to meet, this could indicate that they will need to interact prior to a spinoff show getting off the ground. Should this rumor be true, this could indicate that Bo-Katan could be making a reappearance in season 2, if only to say hello to Cara Dune.

Another spinoff possibility could track Bo-Katan as she attempts to rebuild Mandalore, Darksaber in hand. This would be a unique setting and differentiate it enough from the plot threads of The Mandalorian to justify a standalone spinoff. Katee Sackhoff says she wants to keep playing Bo-Katan "as long as she has a story," and a return to Mandalore would provide story in spades.

"Chapter 11 - The Heiress," in which Katee Sackhoff's Bo-Katan appears, is streaming now on Disney+.