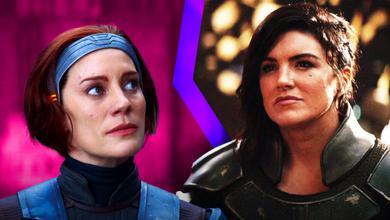 With as much attention as The Mandalorian has rightfully been getting, it's becoming clear that the trajectory of the show is going to get big. There have been rumors of a much larger narrative at play, one that would involve a handful of Disney+ series culminating in a big event - with The Mandalorian just being the first of the bunch.

In recent months, a new rumor emerged suggesting that Disney+ is actively developing a spinoff series starring Bo-Katan Kryze and Cara Dune. The former just made her debut in live-action in The Mandalorian, setting up her future involvement in a big way. Does this lend credence to the possibility of having her own series? Her actress doesn't seem to think so...

In an interview with Deadline, actress Katee Sackhoff says she's heard nothing of a spinoff series from The Mandalorian starring Bo-Katan and Cara Dune:

“I have absolutely no idea what you’re talking about; that’s legitimately the truth."

We have an interesting situation on our hands here. Sackhoff said recently that she'd be open to playing Bo-Katan in a spinoff series, and even liked a tweet about the rumored team-up series when the story initially dropped. However, she seems completely sincere in denying that there's any such show going on - so far as she's aware.

Could Lucasfilm and Disney+ be in the very early stages of developing this series, and even the actors aren't in the know?

It's possible. We know they like to keep their cards close and have a tendency to be as secretive as possible. But when the rumor dropped, it was suggested that Katee Sackhoff and Gina Carano had hit it off on set, stemming the development of the spinoff show. This would conceivably transpire with both actresses in the know.

There's every chance the rumor just ended up being incorrect, and there is no show. Months back, Bob Iger said The Mandalorian would likely inspire some spinoff series, so eventually something will come about. With the Disney Investors Day conference coming up in a few weeks, there's a good chance some of the things coming in the future will be revealed.