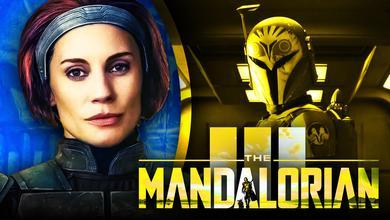 The Mandalorian Season 2 introduced a lot of exciting new characters while also paving the way for legendary Star Wars characters to return. The sophomore season brought back Clone Wars' very own Ahsoka Tano, the fan-favorite bounty hunter known as Boba Fett, and the surprise inclusion of Mark Hamill's Luke Skywalker in the finale.

Despite that, many would agree that one of the most important characters that Season 2 brought back is Katee Sackhoff's Bo-Katan Kryze. The Mandalorian warrior made her triumphant return in "Chapter 11" of the hit Star Wars series, and it clearly affected the beliefs of Din Djarin ever since her appearance.

Bo-Katan served as an ally to both Mando and Grogu throughout the second season, helping them defeat threats while leading them to Rosario Dawson's Ahsoka Tano. The famed warrior also tried to persuade Mando to join their cause to retrieve the Darksaber, but the titular bounty hunter was dedicated to bringing Grogu to his people, thus denying the offer.

Sackhoff's Star Wars character returned during the finale when Din Djarin recruited her to go up against Moff Gideon and his forces. Ultimately, Din defeated Gideon to become the owner of the Darksaber, putting him at odds with Bo-Katan.

Now, it looks like this story will continue in Season 3 as evidenced by a new social media post.

As pointed out by Reddit user spacejunkonion from r/StarWarsLeaks, Bo-Katan star Katee Sackhoff posted a new Instagram story saying that she is on her way to take a COVID-19 test for work, with the actress even teasing what show would it be for:

"I'm on my way to go get my COVID test 'cause she's goin' back to work. Whaaat? What could it be on?"

Considering a recent report that mentioned the third season had already started production as well as the fact that Sackhoff doesn't have any other announced projects lined up for herself, there's reason to believe that Sackhoff is teasing her return to the set of The Mandalorian Season 3.

BO-KATAN'S RETURN IN THE MANDALORIAN

Katee Sackhoff's latest tease could hint that she will be returning as Bo-Katan sooner than expected.

Given the current flow of the narrative of The Mandalorian, there's a strong chance that Bo-Katan will play a major role in the third season of the series. The events of the finale set up a clash between Din Djarin and Bo-Katan for the right to own the Darksaber, and it seems that this will serve as a good chunk of the show's storyline.

The Darksaber storyline and the right to claim Mandalore are expected to be the main focus of Season 3, especially now that Grogu is out of the picture. This gives more story opportunities for Pedro Pascal's Din Djarin while also fleshing out the complexity of Bo-Katan.

The newfound rivalry between the two warriors presents an interesting dynamic, and it will likely lead to multiple standoffs in the future. The finale showed that Din is open to give up the Darksaber to avoid conflict, but the belief and ideals of Bo-Katan proved to be much stronger than that.

It will be interesting to see how The Mandalorian resolves this issue in Season 3, but for now, it's good to know that Sackhoff is excited to play the warrior once again.

The first two seasons of The Mandalorian are now streaming on Disney+.