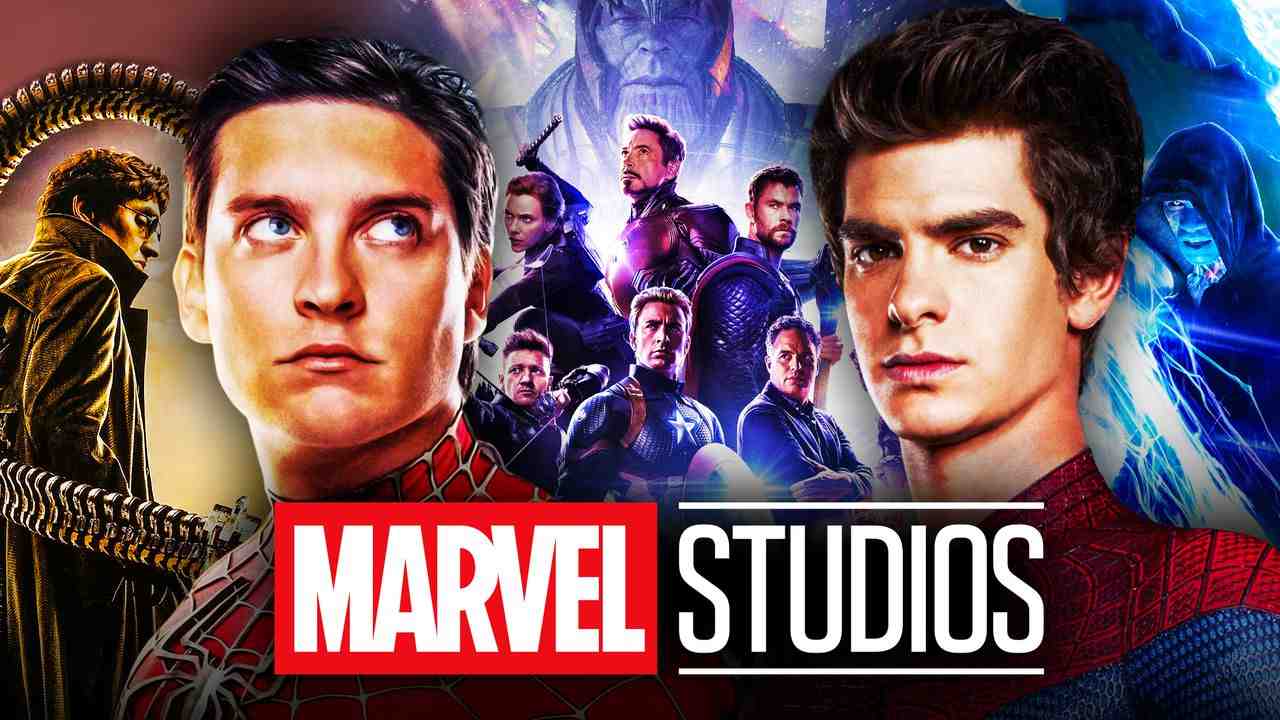 With a trailer still nowhere in sight , MCU fans have been left to wonder how exactly Spider-Man: No Way Home will play out. Concrete information about Tom Holland's third solo outing is hard to pin down, although all signs are pointing to the multiverse playing a key role.

The return of Jamie Foxx's Electro was the first indication that Spidey's next adventure may be a bit different than its MCU predecessors, which was only emboldened by the announcement that the Sorcerer Supreme would be along for the ride too . New information continued to snowball with everyone from Alfred Molina to Charlie Cox being confirmed or rumored to star alongside Spider-Man.

This culminated in arguably the most exciting returning cast members with Tobey Maguire and Andrew Garfield , who are heavily rumored to reprise their respective Peter Parkers. Though the Spider-Man actors have had varying responses to the Internet rumblings , fans are already getting excited to see the three live-action incarnations of Spidey team up.

Their return raises one important question though...

WILL THE OTHER SPIDER-MAN FILMS BECOME CANON?

If all of these characters are returning from past movies, does this mean that the Sam Raimi-directed Spider-Man trilogy and The Amazing Spider-Man duology are now considered canon in the MCU?

Doctor Octopus actor Alfred Molina previously stated No Way Home would be picking up right after Otto Octavius drowned in the river at the end of Spider-Man 2 , making it safe to say that Molina will be playing the same version of his character that fans saw more than 17 years ago.

This would, in theory, make the Raimi trilogy a part of MCU canon, suggesting that Tobey Maguire, Kirsten Dunst, Thomas Hayden Church, and Willem Dafoe would also be playing the same versions of their characters should they return.

One problem comes into play here though - Otto died. In Spider-Man 2 , Octavius sacrifices himself to destroy his reactor and save New York City. The same goes for the Green Goblin, who suffered a cruel fate after a last ditch effort to end the wall-crawler.

Jamie Foxx's comments about Electro also raise questions about how his originating film is impacted.

Fans watching closely would have noticed that The Amazing Spider-Man 2 ’s version of Max Dillon had a certain blue tint to his skin, a physical trait which Foxx stated will be absent this time around . Could this be a hint that Foxx is actually playing a new version of Electro, or did his character simply lose his aquamarine accents upon being sent to Peter’s timeline? Also, he died too.

Perhaps looking at what we know about the rules of the MCU could provide some clues to how No Way Home could deal with its returning characters and what it means for the canon status of the past Spider-Man flicks...

A RECAP ON THE MCU'S MULTIVERSE

From what we know of Marvel Studios' version of the multiverse , the narrative infrastructure of the MCU appears to be the basis for alternate stories going forward. In that light, What If...? still seems to be directly spun off events that fans are already familiar with.

The administration of the Super Soldier serum in Captain America: The First Avenger. The identity of Star-Lord in Guardians of the Galaxy. The ambush on Tony Stark in Iron Man. All of these moments have acted as the inspiration for their respective What If...? episodes, which then spiral into weirder and wackier concepts like an armored Steve Rogers, a shredded Taneleer Tivan, and an army of zombified Marvel characters.

So far, all that the multiverse seems to be changing are aspects of the Sacred Timeline. This isn't to say that as the multiverse grows, but that its universes start to become more divergent and able to turn into vastly different realities like the ones seen in previous Spider-Man films.

But, it seems that Marvel Studios does want to keep some control over what it allows in and out of its stories. Look at Marvel Television for example, which Marvel Studios has continuously distanced itself from . Guardians of the Galaxy director James Gunn even confirmed this himself , affirming that television series based on the MCU pre-Disney+ era are not canon:

"There was never any coordination between the earlier TV stuff and the cinematic side of Marvel like there is now that they're all under the purview of Marvel Studios."

Are those stories considered non-canon even though they're technically possible in the MCU's multiverse?

Where does Marvel Studios draw the line when it comes to canon?

THE CASE FOR CANONIZING

This means there would be no limit on anything story or cast-wise (provided they can convince the actors to come back); it's certainly freeing on one level but could spin vastly out of control if left unchecked. Marvel Studios may be open to the idea of essentially canonizing the entirety of Marvel's history on screen into the MCU, as it means that they have the freedom to decide if they want to bring back Chloe Bennet as Daisy Johnson or Nicolas Cage as Ghost Rider, for example.

Evan Peters' Quicksilver and J.K. Simmons' J. Jonah Jameson seemed to be a testbed for this, indicating that Marvel Studios are somewhat willing to give fans a little treat by referencing Marvel's past efforts in film.

These versions were still entirely new to the MCU though, indicating that the company weren't ready to connect to other films outside its cinematic universe confines just yet. Whether this was because the multiverse was simply yet to be created or Marvel Studios is still hesitant to bring all the previous films under one household is completely up for debate.

Though the MCU's interconnectivity is one of its defining traits, too much of this could lead to the franchise losing its identity in some sense. The Marvel Cinematic Universe thrives on the voices of individual directors making their marks on projects whilst still working towards and in accordance with one vision, in order to achieve some semblance of cohesion.

Canonizing the Spider-Man films, the X-Men films, the Ghost Rider films, the Netflix shows, Marvel Television, and more not only gives viewers way too much homework, it also makes the MCU a bit more all over the place. Especially since this means also bringing in the bad stuff (looking at you, Howard the Duck).

Reinstating past movies could also overshadow how the MCU wants to tackle certain characters. Mutants and the Fantastic Four are still slowly making their way over to join the Avengers, but shining a spotlight on their past theatrical triumphs and misfires could skew how the new incarnations are viewed.

With a multiverse, anything and everything is technically canon anyway due to the infinite possibilities that it allows; that is, unless you part a hard cap on it. So, is there a way to get the best of both worlds? Or, er, both timelines?

So what is Marvel Studios doing? Given that the company wants to make use of fan-favorite portrayals of characters but has been known to stand at arm's length away from non-MCU properties, the only way seems to be the Variant route. Welcoming in Variants of characters seen in the original films would allow them not only to crossover and fans to get their fan service, but also enable them to be encapsulated in the MCU so that the Sam Raimi and Amazing films can still exist on their own separately.

Spider-Man: Into the Spider-Verse ' s approach to its prior material could act as an example of how Marvel Studios would tackle the multiverse; long time fans still get their dancing Spider-Man and Homecoming homages, but general audiences aren't left confused when it feels like they should know who these alternate Peter Parkers are.

Though the stories told in the Raimi and Amazing films would partially inform the characters that appear in No Way Home , knowledge of their events wouldn't be required to follow the new narrative being told. It's possible that Marvel Studios may position previous Marvel stories as being canon-adjacent - technically part of the MCU's multiverse, but not necessary viewing to understand and enjoy the movies that they're making.

Kind of like a tie-in comic; non-essential, but nice to know.

It also allows for more storytelling potential. By having the characters come from branching timelines of the past Spidey flicks, No Way Home has the opportunity to explore other Nexus Events that inform the returning characters or bring them back to life.

Essentially, a number of "What If?" scenarios are born. What if the Green Goblin defeated Spider-Man? What if Peter kept the Symbiote suit? What if Gwen Stacy survived her fall and became a webslinger herself? What if the Rhino actually did something?

These are all questions that No Way Home has the potential to explore thanks to Loki 's introduction of Variants .

This doesn't solve everything, of course. An infinitesimal number of cans of worms are being opened due to the ever-expanding multiverse.

What does this mean for James D'Arcy's return as Edwin Jarvis in Avengers: Endgame after originally starring in the Marvel Television production Agent Carter ? How does this affect the rumored returns of Charlie Cox as Daredevil and Vincent D'Onofrio as Kingpin ? Are Evan Peters and J.K. Simmons' MCU roles going to retroactively be turned into Variants to canonize their respective originating films?

There are a lot more toys for the MCU to choose from now; the question is whether it will decide to play with them all.

Spider-Man: No Way Home premieres in theaters on December 17, 2021.