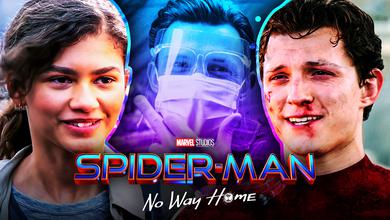 Most times through the last 13 years, Marvel Studios has found a knack for bringing together outstanding casts of actors that mesh well together to bring the MCU's movies to life. This is the case once again with potentially the most anticipated Phase 4 movie of 2021 Spider-Man: No Way Home, which boasts one of the biggest ensemble casts of an MCU film outside the Avengers quadrilogy.

This was shown once again on Tom Holland's 25th birthday, with Spider-Man: Far From Home star Jake Gylenhaal sharing an image of himself with Holland and expressing how he missed the pair being together. Ned Leeds actor Jacob Batalon recently shared his own pictures from the set of the pair's new movie, teasing some of the high school scenes set to come amongst the multiversal madness.

These photos continue in the latest social media blast from another of Holland and Batalon's on and off-screen friends.

Holland's hair is styled just how Peter Parker's hair is done in the MCU, and the actor is wearing a COVID-19 protective face mask and shield. Considering that Spider-Man: No Way Home filmed during Fall 2020 and Winter 2021 of the pandemic, it's all but certain that the photo came from the set of the Spidey threequel.

Zendaya included the following caption with her picture:

Zendaya and Tom Holland have one of the most publicly entertaining relationships in Hollywood outside of their work together on all three Spider-Man movies in the MCU. From social media back-and-forths to Lip Sync Battles, the two haven't grown tired of each other after working on MCU projects for the last five years.

The on-screen relationship between MJ and Peter Parker is set to be one of the intriguing plot points in Peter's civilian life when he's not fighting a potential Sinister Six as Spider-Man. It's clear that there will be some trying times ahead of them whether they're brought on by Peter's superhero life or not, now that the world knows the web-slinger's secret identity.