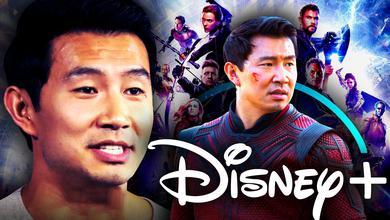 Marvel Studios is well-known for having massive plans for Phase 4 and beyond, which has kicked off thus far with heroes featured throughout the Infinity Saga. After the debuts for at least parts of four Disney+ outings and the long-anticipated Black Widow in July, the MCU will bring its first new leading hero into play with Simu Liu's Shang-Chi.

The actor's first MCU solo movie, Shang-Chi and the Legend of the Ten Rings, is set to come in September, bringing the mystical world of martial arts to the Marvel universe for the first time.

While the movie has been rumored to take place largely in the five-year time jump between Avengers: Infinity War and Avengers: Endgame, its connections to the MCU as a whole are still largely a mystery.

MCU star Simu Liu spoke to Vanity Fair about where his future with Marvel Studios could lead, specifically teasing a future beyond his theatrical appearances.

Liu revealed that his contract with Marvel Studios "doesn't stipulate what or where [he] could be summoned."

He continued to praise Marvel Studios President Kevin Feige for building a "wonderful ecosystem" that can be seen as "almost platform-agnostic," including anything from the realm of "movies, series, streaming, [or] video games" coming ahead:

“My contract doesn’t stipulate what or where I could be summoned. Kevin [Feige]’s built this wonderful ecosystem where it’s almost platform-agnostic—movies, series, streaming, video games. It’s really incredible.”

WHERE WILL SHANG-CHI COME BACK?

This isn't the first time Simu Liu has teased appearances of Shang-Chi outside the September blockbuster, previously mentioning that he would love to play the role if the hero found a way into the world of video games. However, an even bigger revelation is his specific mention of "series" in his list, meaning the duplicating hero could be in line for unexpected Disney+ showings in the future.

Early in Marvel Studios' run with Disney+, it's been clear that leading heroes from these series will play major roles in both the TV and movie spheres within the MCU. Elizabeth Olsen is set to move straight from WandaVision to Doctor Strange in the Multiverse of Madness while Anthony Mackie is taking Sam Wilson from The Falcon and the Winter Soldier to the recently announced Captain America 4.

While fans are still waiting for Liu's first full outing as Shang-Chi, this reveal teases some potentially huge projects coming to both theaters and Disney+ over the next few years.

It's difficult to say where Liu will come next, especially taking Disney+ into account, with no obvious fit and no fifth Avengers movie confirmed yet. However, the stage is set for Marvel's overarching story to see some exciting expansions with stars like Liu leading the way.

For now, fans wait for Liu's MCU debut in Shang-Chi and the Legend of the Ten Rings, which will arrive in theaters on September 3, 2021.