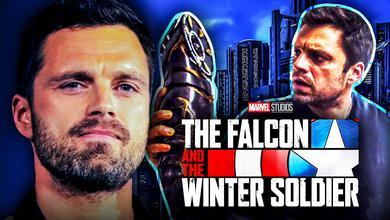 The Falcon and the Winter Soldier served as an important chapter for the early days of the MCU's Phase 4 as fans were introduced to the post-Endgame versions of Sam and Bucky, setting the stage for some big character shifts.

One of the series' biggest surprises came in the concluding moments of the third episode as Ayo and Dora Milaje arrived to recapture Zemo as the titular duo broke him out of prison to aid in the fight against the Flag Smashers. But the Wakandans weren't the only ones who wanted the Civil War villain back behind bars as John Walker's Captain America also went on the hunt to recapture the genius antagonist.

After a brief conversation, a fight quickly broke out between Walker and the Dora Milaje — one that Sam and Bucky reluctantly joined in order to put an end to it. While going head-to-head with Ayo, the Wakandan warrior used a fail-safe to remove Bucky's robotic arm, much to the surprise of the former Winter Soldier.

The very existence of this fail-safe drew great controversy from fans on social media as it suggested that the Wakandans never truly trusted Bucky. Additionally, having spent decades as the brainwashed assassin of HYDRA, the moment also revealed that Bucky still wasn't truly free of outside control.

While the finale of The Falcon and the Winter Soldier is long passed now, the series has been revisited in a recent interview with director Kari Skogland and one of its titular stars.

During a recent interview with The Hollywood Reporter, reflecting on his role in The Falcon and the Winter Soldier, Bucky actor Sebastian Stan discussed the divisive Wakandan fight scene in which the Dora Milaje's Ayo literally disarmed Bucky.

The MCU veteran explained that the “Wakandans were the only ones who could rein in Bucky,” which means that his “loyalty and allegiance” is with them at that point of the series when the Dora Milaje show up.

“The Wakandans were the only ones who could rein in Bucky in any way, shape, or form. That’s where his whole loyalty and allegiance is at that point in the series. When that scene happens, it’s him trying to feel out his perimeters and life again. He owes everything to the Wakandans. But in a way, he is growing up again and breaking out again and trying to find how he can take charge of certain situations.”

The Disney+ star revealed that he had initially questioned the scene, having asked the series' director Kari Skogland why Bucky would ever go against the Dora Milaje in the first place. However, Stan went on to explain that Bucky is “well aware that he's gone too far” in teaming up with Zemo, but it's more about Sam having asked him to “put a stop to [the] altercation” between John Walker and the Dora Milaje:

“[In that fight scene, Bucky] is well aware that he’s gone too far, [teaming up with Daniel Brühl’s Zemo, a mortal enemy of both Bucky and Wakanda]. I always said to Kari, 'Why would he ever stop them?' But it’s really Sam asking him, 'Hey, we’ve got to put a stop to this altercation right now.'”

Additionally, Stan explained why the disarming scene is such an important one for his relationship with Ayo because it's her “putting him back in his place,” which the actor believes “he needed at that point:”

“In that moment when the arm falls off, there’s so much subtext going on in their relationship [with Ayo]. It’s a warning in a sense, and it’s a reminder: 'Hey, you are here now, but just remember why.' It’s a little bit putting him back in his place, which I think he needed at that point.”

DO STAN'S COMMENTS IMPROVE THE SCENE?

The game-changing reveal of the Wakandan fail-safe built into his arm was an important character moment for Bucky in which Sebastian Stan displayed some phenomenal acting as he managed to say a thousand words with just a single expression.

Since being brainwashed by HYDRA to serve as the Winter Soldier after his supposed death during Captain America: The First Avenger, Bucky had never truly been free until the aftermath of Civil War when the Wakandans removed the HYDRA programming from his mind.

King T'Challa's offer to help repair Bucky's mind while providing him with a new bionic arm was a great moment of generosity, especially after spending an entire film hunting him down for his father's murder.

Stan's comments certainly add clarity to why the scene exists in the series, but it does little to settle the woes who dislike its very nature and effect on Bucky's character. Whether Bucky will return to Wakanda in the future is unclear; however, his Disney+ outing reminded viewers he is still the White Wolf, so he could perhaps return to the mantle in a future Black Panther film or elsewhere.

The Falcon and the Winter Soldier is streaming now, exclusively on Disney+.