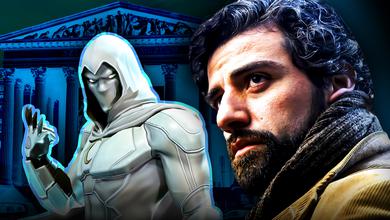 While the in-universe content is taking a hiatus for a few weeks after The Falcon and the Winter Soldier, nothing is slowing down for multiple production teams bringing 2022's massive MCU Phase 4 slate together. Fans continue to wait for more promotional material for movies and Disney+ shows coming in the latter half of the year, although set leaks and news releases help the time pass by nicely before June 11 brings the first episode of Loki.

Currently, director Takia Waititi is hard at work filming Thor: Love and Thunder while Tatiana Maslany and the cast of She-Hulk begin production on their Disney+ series. MCU newcomer Oscar Isaac is also hard at work training for his first outing as Moon Knight, even having been seen with co-star Ethan Hawke before filming for the show reportedly begins.

A new social media post is pointing to this being the case as well, with both Isaac and Hawke involved in this news story.

Goretity Dániel posted an image on Twitter showing cranes and trucks in front of the Museum of Fine Arts in Budapest, Hungary. Evidence gathered by Dániel confirmed that this equipment is being used for the production of Marvel Studios' Moon Knight, which has been taking place inside the museum over the past few days.

There's no word on if major cast members like Oscar Isaac or Ethan Hawke are involved with this museum shoot, though it is a considerable possibility given the length of filming and the amount of equipment involved.

The full post with the photo from the set can be seen below:

So after a little detective work I can confirm: they have been shooting #MoonKnight for the past few days in the Museum of Fine Arts in Budapest. Considering the equipment and timeline, it was definitely not just some short museum visit scene... #OscarIsaac #EthanHawke pic.twitter.com/yusLqKeQXM

ANOTHER MCU PROJECT IS UNDERWAY

Even though there are no details pertaining to what was shot, this news should bring plenty of excitement for Marvel fans. With Ethan Hawke reportedly taking on the main antagonist role in this series, and with Isaac's inclusion as Marc Spector never officially confirmed by Marvel or Disney, Moon Knight seems to have an appropriate sense of mystery behind its production that has fans eager for more.

This Disney+ show will most likely explore Spector's origin story as he fully dives into the lore of Egyptian mythology with Egypt native Mohammed Diab leading the way as the project's director. The scene in question is likely a pivotal moment in the hero's journey, either as he becomes Moon Knight or as he faces off against Hawke's unspecified villain in an epic showdown.

Regardless of what's being shot right now, the fact that production is underway is a great sign for the MCU's progress with Phase 4. Moon Knight's arrival has been one of the most highly-anticipated of any new character in the MCU, and with filming having started, fans will be on the lookout for more information as it becomes available.

Moon Knight is set to arrive on Disney+ sometime in 2022.