Iron Man may be one of the most iconic things to come out of the Marvel Cinematic Universe, but there's something else that could easily compete for the top spot: the Infinity Stones. Those bright, powerful gemstones everyone wanted their hands on were all over the first three phases of the MCU.

It all began when the Tesseract debuted at the very end of Thor, though the first actual stone wasn't properly seen until Guardians of the Galaxy (with two previous ones being held within casings and another being red floating liquid).

It all culminated in Josh Brolin's big bad Thanos collecting all six of them, putting them in a golden gauntlet, and snapping away half of the universe's population—only for Hulk and Iron Man to right that wrong in Avengers: Endgame.

Even after that, the stones have popped up in projects such as Loki and What If...?.

Marvel Studios clearly doesn't want to let them go completely. Nothing speaks to that more than a newly unveiled, purchasaby, $20,000 reality stone-based gemstone.

East Continental Gems has officially unveiled the first gemstone in their new genesis series, which is based on the Infinity Stones found in Marvel Studios' Infinity Saga.

The stone the company chose to release first is none other than the Reality Stone, which made its MCU debut in Thor: The Dark World, though it wasn't seen in stone form until 2018's Avengers: Infinity War. 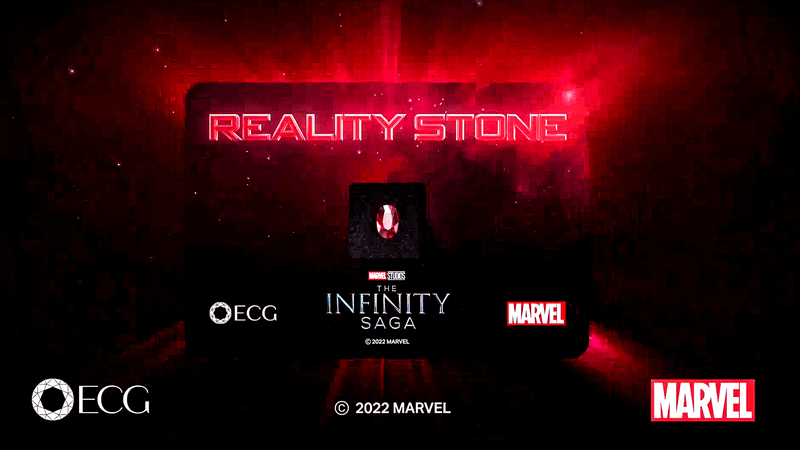 It comes in various shapes and sizes as well for those wanting a specific cut.

Sadly, there doesn't seem to be a gooey-liquid form like the one seen in Dark World.

If one has the money to spend, people aren't just limited to one stone. However, as a disclaimer, they don't actually come with the ability to shape reality itself.

So what does one do with such an expensive gemstone? Well, there's a perfect spot for it in Marvel's previously revealed $25 million dollar Infinity Gaunlet—with that price including all six stones.

It's not clear which stone may be revealed next, but fans can expect to see five more gorgeous gemstones go up for purchase at some point in the future.

Needless to say, there will be countless disappointed collectors who'll want to grab the Gaunlet and all six stones but will never be able to do so in a lifetime. But, for all those millionaires and billionaires, this is a dream come true.

For those who don't have thousands, or even millions, of dollars to spend on precious gemstones, Disney has alternates. The company is selling far cheaper replicas of the Infinity Stones and their special housings on its website and at its theme parks.

Though, those will still cost a pretty penny, as all of them cost roughly a hundred dollars individually.

This new wave of Marvel Studios projects, dubbed The Multiverse Saga, seems like it might be debuting its own unique MacGuffins. Could fans see uber-expensive versions of them sometime in the future as well?