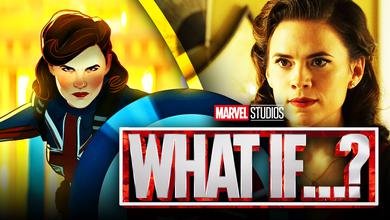 Marvel Studios has plenty to look forward to over the next seven months including four Disney+ exclusives and four major movies coming to theaters across the world. In this huge batch is the MCU’s first dive into the realm of animation with What If…?, which was recently confirmed to be debuting in August.

This ten-episode streaming series will take a look back at the MCU’s Infinity Saga, exploring how certain stories would have been different with one major plot detail changed. This includes examples like T’Challa becoming Star-Lord instead of Peter Quill along with the introduction of zombies into the MCU with a zombie Captain America fighting Bucky Barnes.

More details have arrived pertaining to how this show will begin, particularly with another story that’s been teased since it was first announced.

ANOTHER NEW SUPER SOLDIER FOR THE MCU

The Summer 2021 issue of Disney’s D23 Magazine obtained by The Direct teased plot details of the What If…? episode with Peggy Carter taking the Super Soldier Serum.

Marvel Studios producer Brad Winderbaum teased how he and the team “[geeked] out” about the possibilities of certain moments in the movies playing out differently. Specifically, he asked “What if Peggy Carter got into that pod and became a Super Soldier,” leading to a discussion about that episode:

“As you can imagine, there are so many great moments in the films to choose from. Very quickly, you start to geek out. And you wonder, ‘What if Peggy Carter got into that pod instead of Steve Rogers and she became a Super Soldier? What would have happened in World War II?’ Then you start to think about what else was happening in that movie. The Red Skull would still be out there, of course, and the Tesseract would still be a problem.”

Winderbaum also revealed other details about the Iron Man suit that appeared in the trailer, confirming it was built by Howard Stark and that "the Tesseract was the thing that [powers] it:”

“You start piecing it together and it leads to another discovery: ‘If Steve Rogers stayed skinny, he’d still be a part of the story. He and Peggy would still fall in love, probably. What if Howard Stark build them an Iron Man suit and the Tesseract was the thing that powered it?’ When we looked at those initial ideas, we picked ones that took on a life of their own, where it was more than, ‘Wouldn’t it be cool it…?’ It was.”

Futhermore, Disney reconfirmed that this Super Soldier Peggy Carter scenario will be the premise of What If...?'s premiere episode when the series debuts this August.

“YOU HAVE A SUPER SOLDIER”

The plot appears to closely follow the events of 2011’s Captain America: The First Avenger, as was somewhat expected, although it’s exciting knowing that Howard Stark is set to build the first Iron Man suit instead of his son, Tony, later on. Peggy is seen riding on the back of this suit, presumably with Steve as its pilot, as Howard’s classic genius shines through in the world of animation just as it did in live-action.

The biggest questions now are what the rest of the episode will entail as well as if and how it will fit in with the nine episodes that follow. Promotional material has teased the idea of the Guardians of the Multiverse, which could lead to key characters from each episode teaming up for some end goal as the season comes to an end.

No matter how these details pan out, fans should be thrilled to see Peggy, Steve, and Howard in action in this revamped story.