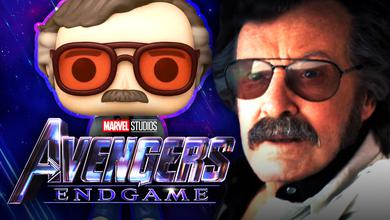 It's hard to believe that Stan Lee has been gone for over two years now. Lee made his final appearance in 2019's Avengers: Endgame, so it just didn't feel right seeing Spider-Man: Far From Home later that summer and not getting the signature Stan Lee cameo that everyone has grown to know and love.

If there's one thing Stan Lee did for everyone, it was putting a smile on their faces. And now that he's gone, fans continue to come up with unique ways to remember Lee for everything he did for the Marvel fan base. In fact, Marvel as a whole would hardly exist today if it wasn't for Stan.

Funko has taken notice of this, and has released quite a few Pop! figures in memory of the Marvel legend over the years. They've now released three Stan Lee figures in 2020, and although the newest addition to the collection perfectly encapsulates Stan's hilarious Endgame performance, it also couldn't be truer to the real-life look of Stan Lee himself.

As part of Funko.com's "Ice to See You 2020" Event, an exclusive figure of Stan Lee was released, commemorating Stan's final MCU cameo appearance in one of Avengers: Endgame's many time-traveling scenes.

Based on his real-life appearance from the 1970's, Stan the Man is stylin' in this new Funko mold, donning his classic aviators and oh-so-many shirt buttons.

Here, the Funko figure is shown to be packaged with the same box art as the rest of the hero-filled lineup for Avengers: Endgame. This matches the packaging of Endgame stars such as Iron Man and Valkyrie, rounding out the Endgame collection quite nicely. Completed with the Funko Shop Limited Edition sticker, this Stan Lee Funko Pop is a highly coveted piece to add to any Marvel collection.

This marks the eighth Funko Pop! to be made for Stan Lee's MCU appearances, and the third to be released in 2020. Stan's cameos throughout the MCU have created some of Marvel Studios' most beloved scenes ever, so having yet another Stan Lee MCU moment immortalized as a Funko figure is definitely a treat.

Earlier in the year, Stan Lee's first MCU appearance in 2008's Iron Man was made into a Funko figure of its own. Now, just a few months later, his last MCU appearance has been immortalized in Funko's signature fashion as well. This figure commemorating Stan's last MCU hoorah makes it just a bit more special, especially since he was made to resemble Stan in his younger, sprier days.

The Pop! figure sold out minutes after its release on December 16, but many of Funko's recent exclusives have been restocking spontaneously, so not all hope is lost if you weren't able to grab one as soon as it came out.