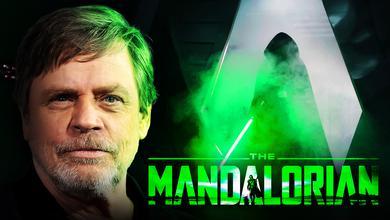 The Mandalorian was a breakaway hit for Disney's Star Wars content, and Season 2 did not disappoint. With references pointing to a grander, multi-show showdown with Grand Admiral Thrawn to the appearance of animated characters like Katee Sackhoff's Bo-Katan Kryze and Rosario Dawson's portrayal of Ahsoka Tano, the stage was set for a grand finale.

Hopes were high for the Season 2 finale, but almost no one expected Mark Hamill to reprise his role as Luke Skywalker on the show.

Hamill recently sat down to chat about his Mandalorian appearance.

SWORN TO SECRECY REGARDING THE MANDALORIAN

In a video interview with Jimmy Fallon posted to YouTube, Mark Hamill discussed his surprising return to the character of Luke Skywalker and the secrecy involved in the production. Hamill started by saying he had thought he "had finished playing that part" and "never expected to do it again."

He explained that he expected "if they ever told stories of Luke in that period—post originals and pre-sequels—they'd get another actor." When series creator Jon Favreau and writer Dave Filoni approached him about the idea, Hamill says he was "stunned."

Hamill went on to remark that he couldn't share any details as he was "sworn to secrecy."

"One of the main things with Mandalorian is you are sworn to secrecy. I can't even talk about it with my family, even now. "

He did, however, let slip that fans can look forward to a "special coming on Disney+ on August 25" that will shed details on the episode's production.

"But one thing that I have to tell you even though I can't talk about it: there's a special coming on Disney+ on August 25, which is a 'Making Of' the season finale of Season 2 which is the episode I was in, so that will answer a lot of your questions."

MORE LUKE SKYWALKER IN THE FUTURE?

While it's likely this small cameo in The Mandalorian was a one-off for Hamill, it seems that Favreau and Filoni are willing to use Skywalker Saga characters like Luke in future content. The return of Boba Fett in the show and in the upcoming spin-off The Book of Boba Fett shows that Star Wars isn't done with characters from the original films.

As Hamill mentioned though, it does seem likely that recasts will be necessary should they wish to use these characters again during the post-Return of the Jedi period. While the CGI used to de-age Hamill wasn't atrocious, it was quite noticeable, and certainly not something they'd want to employ for the entire length of an episode. Perhaps fans who have been pointing to Sebastian Stan as a fan-cast for young Luke will see their dreams come true in future Star Wars projects on Disney+.

Ahsoka's mention of Grand Admiral Thrawn in Season 2's fifth episode points to a potential retelling of the acclaimed Heir to the Empire series by Timothy Zahn that introduced Thrawn and featured the Admiral nearly managing to single-handedly restore the Empire to power. While that book series is no longer canon, Thrawn was brought to life in the animated Star Wars: Rebels, and it seems likely that he'll be making his live-action debut soon enough.

Luke, Leia, and Han featured heavily in the Heir to the Empire series, so it's possible the characters may be recast for a retelling. There are those who are skeptical of recasting these beloved roles, as seen in the reaction to Solo: A Star Wars Story, so perhaps Lucasfilm will choose an in-between path. The studio could retell the Heir to the Empire storyline, but swap out Luke, Leia, and Han for Rebels characters like Ahsoka Tano, Ezra Bridger, and Sabine Wren.

Only time will tell whether Luke Skywalker will appear in Star Wars again and who will play him, but fans can look forward to seeing behind the scenes of the Mandalorian Season 2 Finale when the special airs on August 25.