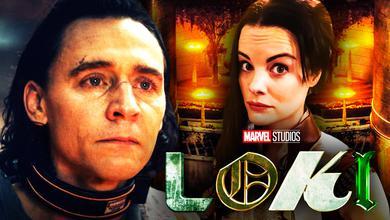 Warning - This article contains spoilers through Episode 4 of Loki.

Summer 2021 continues to thrive in a big way for the Marvel Cinematic Universe, within which Episode 4 of Loki premiered for fans worldwide.

This new outing threw Tom Hiddleston's Loki and Sophia Di Martino's Sylvie into worlds of trouble as the TVA rescued them from Lamentis-1 and immediately pressed them for answers. Some of the show's most emotional moments were unveiled as the TVA's true intentions started to reveal themselves, and the plot even included teases for exciting entries coming later in Phase 4 as well.

The show's leading actor got to showcase some true emotion through trying situations, which included a time-loop-induced punishment for betraying Mobius and the TVA. In an exciting moment for fans, this led to the long-awaited return of one of an MCU regular in Jaimie Alexander's Lady Sif.

To celebrate her first on-screen MCU appearance in eight years, Alexander took to social media to give fans a behind-the-scenes look into this magical moment.

THE RETURN OF LADY SIF IN LOKI

MCU star Jaimie Alexander posted a behind-the-scenes selfie in her Lady Sif costume on Instagram to commemorate her appearance in Episode 4 of Loki.

Showcasing her missing chunk of hair that was featured in Episode 4, Alexander included a memorable quote from 2017's Thor: Ragnarok but with her own comedic twist:

Considering the God of Mischief pulled quite the cruel prank on one of Asgard's finest warriors, Alexander captured quite the appropriate sentiment of "a-hole" in her caption.

As for the actress' appearance, this marks the third time she has reprised her role in the MCU after first appearing in 2011's Thor and 2013's Thor: The Dark World. She's even brought Lady Sif into Marvel's first round of television programming, appearing in two episodes of Marvel's Agents of SHIELD.

Alexander's inclusion in Loki was rumored as far back as December 2020, although the specifics of her story in the show were a mystery. With her only appearing in a torturous time-loop scene alongside Tom Hiddleston, it seems unlikely that she will play a larger role in the rest of the plot.

Alexander's return is a welcome one after so much time away from Marvel Studios, and it helps lead directly into her big-screen return in 2022's Thor: Love and Thunder. After being absent from Hela's attack in Thor: Ragnarok and with her whereabouts unknown during Avengers: Infinity War and Avengers: Endgame, she will have the chance for plenty of action and drama as she rejoins the fight.

Episode 4 of Loki is now available to stream on Disney+.