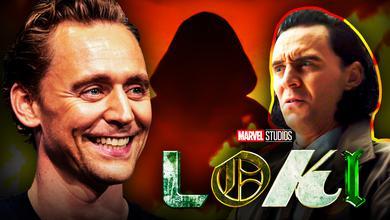 Warning: This article contains spoilers through Episode 2 of Loki.

Marvel Studios is officially one-third of the way through its third Disney+ exclusive Loki after the premiere of Episode 2. With the God of Mischief now having ingratiated himself with the Time Variance Authority, the stage is set for a new level of mayhem with Loki working his way towards a new end goal.

Tom Hiddleston and Owen Wilson developed their unlikely partnership further as they headed to the mid-21st century to catch their mysterious Loki Variant teased at the end of Episode 1. That mystery was solved in exciting fashion during the final seconds as the hooded figure revealed herself to be Sophia Di Martino’s Lady Loki, who had been rumored to be included in this show for most of the past year.

This reveal was certainly a huge moment for both the story and the fans watching it, on which leading man Tom Hiddleston recently gave his thoughts after seeing it come to life.

Loki leading actor Tom Hiddleston spoke with CinemaBlend about the arrival of Sophia Di Martino's Lady Loki at the end of Episode 2.

During Marvel Studios' press junket for Loki, Hiddleston admitted that it was "really interesting" for Loki seeing Di Martino's version of the character and seeing his own "characteristics inhabited by other people." It was an opportunity for him to see Loki's "capacity to sort of provoke and disrupt and manipulate with charm" in a being standing opposite of him:

"I think certainly there's, in that second episode, there was a moment of taking these characteristics which I had found interesting about Loki - his capacity to sort of provoke and disrupt and manipulate with charm, often with charisma, with wit, and is sort of always playing chess with people. You're never quite sure if it's sincere, if you can trust him. And seeing those characteristics inhabited by other people was really interesting."

Hiddleston also seemed fascinated by the concept of Loki being so much bigger than just the character he's played, having "a very freeing feeling" and enjoying seeing "how those qualities of Loki might exist outside of [him] completely." Not wanting to give anything away, he simply teased that the show "contain[s] multitudes" and that it's "just really fun:"

"It was a really interesting mirror for me. And then also a very freeing feeling of like delighting in how those qualities of Loki might exist outside of me completely. And I really enjoyed it. It was just really fun. I don't want to spoil things, but you'll see where it goes because we contain multitudes, as some great psychologist once said."

Although Lady Loki had been rumored to be included in this show, along with other teases laid out for Kid Loki and an older Loki, nobody was sure of exactly how these Variants would manifest alongside Hiddleston's long-standing anti-hero. This still appears to be the case after Episode 2, which concluded with a full reveal of Di Martino's mayhem-causing take on the God of Mischief.

Due to Loki being utilized as a supporting character through his first six MCU appearances, this show has the chance to tell a story that centers on him as he deals with one crazy situation after another. Couple that with the introduction of the Time Variance Authority and teases of the Multiverse going into madness, and it's the perfect storm within which to bring new takes on the iconic MCU character.

Now that fans have seen this massive reveal, there is no telling what the show's central player will tackle now that he's followed Lady Loki literally into the unknown. Hiddleston is clearly having the time of his life bringing this new version of Loki to the streaming world and with a Multiverse's worth of avenues in front of him down which he can travel.

The first two episodes of Loki are available to stream on Disney+.