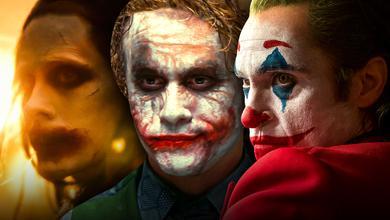 With just over a month remaining until its release, director Zack Snyder released likely one of the final full trailers for the Snyder Cut of Justice League. Snyder is working toward multiple goals with this cut, including putting Joss Whedon and his work in the rear-view mirror. This new version of the DC Extended Universe’s team-up movie is building considerable hype as Snyder’s full vision is brought to life.

The new trailer expands on a number of important sequences from the DCEU’s past, such as the Batman Knightmare scene and Superman’s death from Batman v Superman: Dawn of Justice. This comes with new images of the villainous duo of Darkseid and Steppenwolf as they take on new life in the movie.

The trailer even closes out with a look at a man discussed a great deal through the promotional tour: Jared Leto’s Joker. In the trailer's final seconds, the Clown Prince of Crime’s line of dialogue gives an intriguing nod to an Internet meme and a related sister project from DC Films.

WE LIVE IN A SOCIETY…

In the closing seconds of the latest trailer for Zack Snyder's Justice League, premiering on HBO Max on March 18, Jared Leto's Joker delivers a line to Ben Affleck's Batman that has raised some eyebrows. Leto's Joker says to Batman "We live in a society...where honor is a distant memory" before turning to the Caped Crusader looking more disheveled than ever before in the DCEU.

Jared Leto followed the release of this trailer with his own response on Twitter:

We live in a society https://t.co/3OaJxZlfOy

Despite never having been specifically used in a DC Comics project until now, this phrase has become associated with the Joker over the past number of years.

Long before any memes came to be, "We live in a society" was actually uttered by Jason Alexander in a 1991 episode of Seinfeld. Years later, starting in the mid-2010s, forum websites like 9gag and 4chan began using the phrase to embody the general detachment that people feel from the society that they've been raised in.

As memes often go, the Internet stretched the phrase's meaning in a variety of directions, many becoming humorous in nature. The saying made its way through more popular social media platforms like Twitter and started to be used alongside images of the Joker due to the DC villain's belief in a corrupted and broken society. Specifically, Heath Ledger's iteration of the Joker from 2008's The Dark Knight became common imagery to see next to the "We live in a society" meme much in thanks to Ledger's universally-praised performance.

The phrase and its meme continued to grow in its usage and meaning in recent years, being used to convey admonishment of any situation that is found to be ridiculous or unbelievable. It became so widely popular that tens of thousands of fans signed a petition during the production of Todd Phillips' 2019 film Joker to have Joaquin Phoenix exclaim it for his portrayal of the character.

Although the petition didn't succeed in full, the message still seemed to slip its way into the 2019 blockbuster. Joaquin Phoenix's Arthur uttered this line right before shooting Murray Franklin on his talk show:

"What do you get when you cross a mentally-ill loner with a society that abandons him and treats him like trash?"

The full scene can be viewed below:

The line from the comics wasn’t uttered verbatim in the movie, nor does it actually connect back too close to what was originally uttered. However, the overall message that came from the meme is absolutely associated with the message of Joker.

Todd Phillips' Joker was one of the most controversial superhero releases of all time, largely for the fact that many feel it was a typical Oscar-bait period piece acting under the guise of a superhero movie. The film was nominated for 11 Oscars, including a win for Joaquin Phoenix in the Best Actor category for his portrayal of Arthur Fleck.

The movie took plenty of risks by centering on the classic Batman villain, but the riskiest move was taking such a different route in terms of plot from how superhero movies are typically told. This led to incredibly mixed reactions from critics and fans alike, with many commenting on how the movie went so hard into the deep societal analysis that it took away from the core of the Joker’s comic origins.

Yes, "we live in a society" came straight from the comic pages. Yes, 2019's Joker was an awards circuit darling, largely stemming from the use of this line as a driving plot device. So the question that remains is this: Why in the world did Zack Snyder add this into a movie originally released over three years ago?

WHY DO WE LIVE IN THIS SOCIETY AGAIN?

When Zack Snyder originally got the green light to complete the Snyder Cut of Justice League, the flood gates seemed to open for him to re-imagine the film in any way he saw fit. Snyder was able to get about a week's worth of reshoots in during October 2020, which is likely when he filmed Jared Leto's work for the movie. It's unclear whether Leto was originally intended to be in the 2017 theatrical cut, but Snyder clearly took the opportunity to try to improve on the Clown Prince this time around.

Whether Snyder took the "we live in a society" line directly from the original comics or from the 2019 movie is unknown, as is why he made this call to begin with. Snyder has always been seen as someone who will take chances and make movies his own way, and the Joker addition comes as almost an expected surprise at this point considering his recent track record.

It will be interesting to find out what leads the Joker to change personalities so drastically between 2016's Suicide Squad and the Snyder Cut. With an absolutely off-the-wall persona in his original cut, it doesn't seem to make a ton of sense yet why he would basically become Joaquin Phoenix's iteration of the character transplanted into the DCEU.

Maybe it's an overtly cynical way of thinking on this end, although this trailer moment already has fans abuzz about what's going to become of Jared Leto's villain. Who knows? Maybe taking inspiration from an Oscar-winning film will help the Snyder Cut elevate to a whole new level of success.

All of this and more will be revealed when the Snyder Cut of Justice League debuts on HBO Max on March 18, 2021.