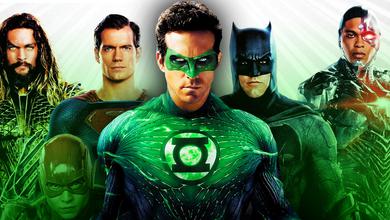 As the film's HBO Max debut inches closer, the marketing for Zack Snyder's Justice League has ramped up in recent weeks. As expected, Snyder has been leading the charge in terms of promoting his highly-anticipated director's cut by showcasing behind-the-scenes tidbits as well as opening up about his departure back in 2017.

It's no secret that the continued barrage of reveals from Snyder is more than enough to boost hype for the upcoming premiere of the four-hour-long film, and it looks like the director will not stop anytime soon.

On the surface, the Snyder Cut will be vastly different from the disappointing theatrical cut that premiered in theaters, and one of the unique changes is the inclusion of more iconic DC characters like Harry Lennix's Martian Manhunter and Ray Porter's Darkseid.

Aside from the confirmed character additions, another cameo was teased by Snyder, prompting all sorts of theories about who will show up at the last minute. Now, it seems that one DC hero will be crossed off that list, as evidenced by a recent tweet...

In a tweet, Ryan Reynolds debunked rumors that he will return as Hal Jordan a.k.a. Green Lantern in Zack Snyder's Justice League.

It’s not me. But what a cool pirate flag to cameo as Hal. Maybe it’s another GL? But for me, the suit stays in the closet. I mean, computer. https://t.co/QU4NRVadiz

This development came after it was confirmed that Snyder re-shot the ending of his Justice League to include a mind-blowing cameo.

NO GREEN LANTERN IN THE SNYDER CUT?

Based on the tweet, it's possible that Reynolds is actually telling the truth, considering that he was not present during the much-talked-about re-shoots that happened a few months back. However, this could also be a red herring from the actor, shifting the attention of fans towards another topic (a typical Hollywood casting move).

Interestingly, this isn't the first time that Reynolds spoke about his potential involvement in Zack Snyder's Justice League. The Deadpool actor previously claimed that he would “love” to appear in the Snyder Cut. On top of that, the actor also shared a parody video about the director's cut, showing off Tom Cruise as Hal Jordan.

Clearly, Reynolds' outspoken and comedic nature makes it difficult to decide if the actor is lying or not, but it would've been fascinating to see his return as Green Lantern in Zack Snyder's Justice League. In many ways, it could serve as his own redemption arc under the DC banner, especially after the disappointing outing of the 2011 film.

At this point, the mind-blowing cameo at the ending of the Snyder Cut could be anyone, but Reynolds did point out that a Green Lantern can still show up in the film. Aside from Hal Jordan, there are many members of the Green Lantern Corps, with the likes of John Stewart and Jessica Cruz as prime candidates.

Whatever the case, even without Reynolds' return as Hal Jordan, Zack Snyder's Justice League is still poised to deliver more surprises.