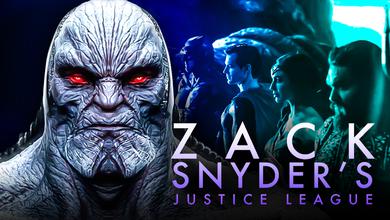 It's been over six weeks since HBO Max launched the long-awaited debut of Zack Snyder's Justice League, which allowed the famed DC director to share his true vision for what the team-up film should have been. The #RestoreTheSnyderCut movement was overwhelmingly supportive of the release after Snyder got the green light to revisit this film, which improved on both the plot of the movie and the visual effects that helped bring it to life.

The project came in at 242 minutes of run time, and due to the thousands of VFX shots that pulled everything together, the computer-generated characters went through plenty of development before coming to screen. Many of those early designs have made their way to the public in the weeks following the film's release, showing looks at heroes and villains alike.

In that same vein, the movie's concept artist just gave a peek into an alternate design for the story's main villain.

A NEW LOOK AT DARKSEID

Zack Snyder's Justice League concept artist Jerad Marantz shared two images on Instagram of an early design of the movie's villain Uxas/ Darkseid. This "really early version" of the alien without his classic helmet that he wears throughout the film, giving him a more "ceremonial" look:

This image shows a frontal look at Darkseid, with his upper half on full display. The skin continues all the way around his shoulders and skull, making him look just as terrifying as expected.

The second image gives a closeup on Darkseid's face and chest, highlighting every wrinkle and crevice developed through his thousands of years as a warrior.

"Here’s a very early version of Uxas I did for Zack Snyder's Justice League. I wanted to try something A little different and ceremonial. My earliest versions of him did not have the classic Darkseid helmet."

DARKSEID IN ALL HIS GLORY

Marantz has stayed active on social media sharing early images of what the characters from the Snyder Cut looked like before their final forms came to the big screen. The artist gives this treatment to the massive alien Uxas by stripping him of his classic armor and putting him on display in his purest form.

Unlike Steppenwolf, who removed the armor on his head for one of his scenes with Darkseid, the big bad never removed his armor in the final Snyder Cut. However, he still managed to serve as quite the intimidating figure both in his early flashback scenes and during the rest of the movie as he led his high-ranking soldiers on Earth in the search for the Mother Boxes.

The big question now is whether Darkseid will return to the canon DCEU at any point in the future. Given he's one of DC Comics' most iconic villains, central to the story of the Justice League, fans are hoping for this to happen sooner rather than later.