The MCU is hitting the silver screen and is holding nothing back with their first run on Disney+. With their opening projects made for streaming, they look to highlight some of the MCU’s most beloved supporting characters. As the Marvel Cinematic Universe expands, we take a look at the inaugural round of shows we can enjoy in the comfort of our living room.

Marvel Studios is stepping into a brand-new world of storytelling as each of these shows is expected to be 6-8 episodes ranging from 40-90 minutes long. Here is what we know about The Falcon and The Winter Soldier, Wandavision and Loki so far and what this could mean for the future of these characters and the universe they now lead.

The Falcon and The Winter Soldier

Sam Wilson and Bucky Barnes first appeared on screen together in the fan-favorite Captain America: The Winter Soldier. Since then, the two primary members of “Team Cap” have developed into two of the greatest “frenemies” in the MCU. After the events of Avengers: Endgame , both Sam and Bucky experienced the final chapter in the story of their leader and closest friend, Steve Rogers. The chapter concluding with Steve passing Sam the mantle of Captain America, after seemingly gaining Bucky’s approval.

When fans saw the first look at the new set of Disney+ Marvel projects , the trailer opened with arguably the most electric shield throw by anyone not named Steve Rogers (sorry Hawkeye). While Sam appears to be training for his new role, Bucky comes face to face with his most significant foe, Helmut Zemo. After being snapped in Avengers: Infinity War , both of these heroes will take a page out of Rogers’ book after essentially being frozen in time and being placed in the future.

"I think people are going to be surprised by how in-depth and evolved the characters become by having six to eight hours to them, instead of just two hours."

- Anthony Mackie on The Falcon And The Winter Soldier

Both of these characters hold many questions with them. How will Sam handle the responsibility of being the new Captain America? Does Bucky finally get a chance to live life under his own free will? And how will the world respond to the return of these two previously wanted men? We will get the opportunity to have these questions answered and dive more in-depth into two of the most veteran characters in the MCU.

The Falcon and The Winter Soldier is scheduled to premiere on Disney+ in August 2020. 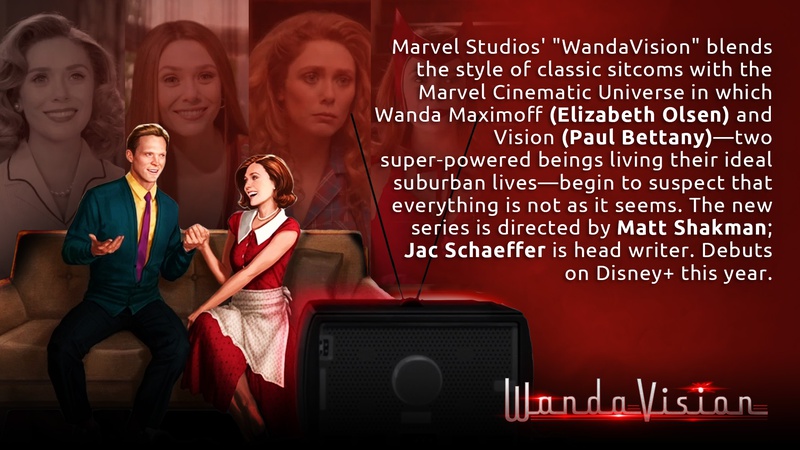 The roller coaster journey of Wanda Maximoff has led to one of the most intriguing ventures by Marvel Studios to date. Audiences saw her transform from a volunteer science experiment to an Avenger, and then to a wanted “weapon of mass destruction” before being snapped in Avengers: Infinity War. When fans last saw Wanda, she reached a new level of power and emotion in Avengers: Endgame. After helping defeat Thanos, Wanda now has to deal with losing both the love of her life and the last five years.

In our first look at Marvel Studios’ newest “big risk” project, we see Wanda and the revised Vision skip through decades of television history as they appear to be living their ideal family life. But with the Scarlet Witch’s long history of creating her own realities, we should expect to see a variety of twists, turns, and illusions. It seems that WandaVision will be a mix of mind-bending reality manipulation and classic TV sitcom hijinks. The latter supports the return of some of the MCU’s most beloved comedic relief experts (Darcy Lewis, Jimmy Woo and an all grown up Monica Rambeau). It is hard to predict the direction of a show that seems to be attempting to travel down many paths, but one thing is sure… things are about to get weird.

WandaVision is scheduled to premiere on Disney+ in December of 2020. 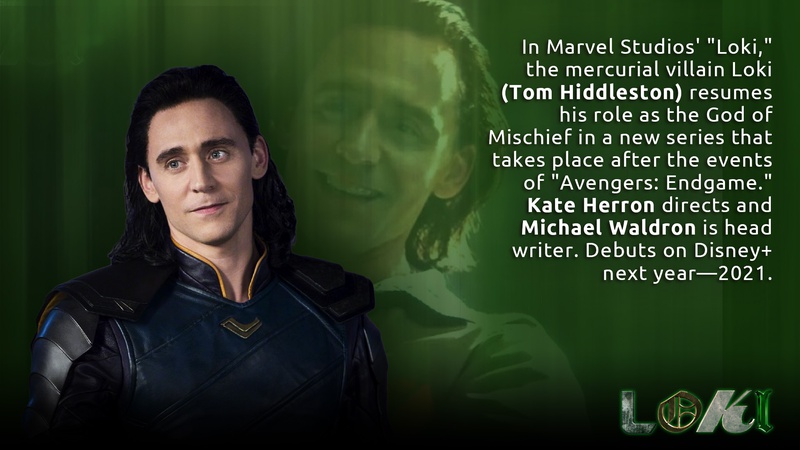 Writer: Michael Waldron ( Doctor Strange In The Multiverse of Madness )

Both of the first new MCU Disney+ shows will feature characters who are dealing with being placed in a new time and continuing their story. However, Loki will deal with a character that not only mysteriously escaped into the past but also one who has already met his fate in the MCU. Loki has been one of the most enigmatic villains in the history of Marvel movies but he now finally getting his own story. While in the middle of a perfectly named “time heist” by the Avengers in Avengers: Endgame, Loki re-captures his most prized MacGuffin, the Tesseract, and escapes mysteriously into the universe in the year 2012.

In arguably the most surprising clip in the Disney+ trailer, we catch up with Loki, who appears to be detained by the Time Variance Authority (TVA), an organization known for being tasked to clean up tampered timelines. Despite this, our favorite anti-hero seems to be confident that he will soon regain the preverbal upper hand.

A 2012 Loki in control of the Tesseract is a force to be reckoned with. And with the TVA getting involved we can assume that his very existence has become a problem for the universe. There is no doubt that the Prince of Asgard, rightful King of Jotunheim, and God of Mischief will be looking to continue his quest to rule.

Loki is scheduled to release on Disney+ early 2021.